WHY MOMMY IS A DEMOCRAT MOONBAT 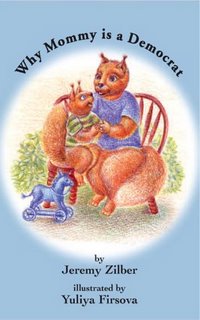 I totally agree with Gerard Vanderleun, Dr. Helen and neo-neocon about the this piece of cutesy propaganda worthy of the old Soviet Union in its cuddly oppressive heyday.

The platitudes served up in this book with such reckless abandon; along with the less-than-subtle "hidden" messages conveyed by the drawings that accompany the text, should more than adequately contribute to the ongoing destruction of our children's critical thinking capabilities by creating a painless shortcut to rational thought. If the Democrats are lucky, this shortcut will cancel out any self-assertive neuroelectrical impulse cascading toward a synapse within their tiny little brains.

And they will become happy happy Democrats.

It is a design project worthy of Lenin himself!

Go and take a look at some of the sample pages and after you have finished gagging, you might want to go read an excellent post from Gagdad Bob at One Cosmos. Here is an excerpt:

A while back, I wrote a post entitled Divorce American Style, discussing how the American political system historically bifurcated into two parties more or less mirroring the archetypal maternal and paternal spheres. As it evolved, the Republican party came to represent masculine virtues such as competition, maintaining strict rules (“law and order”), standards over compassion (i.e., not changing the rules for members of liberal victim groups), delayed gratification, and respect for the ways of the father--that is, conserving what had been handed down by previous generations of fathers, and not just assuming in our adolescent hubris that we know better than they.
[...]
The Democratic party, on the other hand, came to represent the realm of maternal nurturance--compassion over standards (i.e., racial quotas), idealization of the impulses (just as a mother is delighted in the instinctual play of her child), mercy over judgment (reduced prison sentences, criminal rights, etc.), cradle-to-grave welfare, a belief that we can seduce our enemies and do not have to defeat them with manly violence, and the notion that meaning, truth and values are all arbitrary and subject to change (which is true of the fluid world of emotions in general).

Bob's post is a gem, but for heaven's sake--whatever you do--don't let your kids read it! It might make those synapses start firing out of synch with the party line.
Posted by Dr. Sanity at 11:01 PM