Wretchard at The Belmont Club:

But JCS may have been wrong to think that the cartoon was about "the state of readiness of today's Armed Forces". No. It was far more appropriately an unwitting yet brilliant commentary on the souls of Tom Toles and the Washington Post editors themselves. John Kennedy once observed that "A nation reveals itself not only by the men it produces but also by the men it honors, the men it remembers." One might add that people most clearly reveal their statures by what they choose to mock.

That is what the "progressive" left did when it discussed the "F-word" yesterday. They revealed their true self--probably without even realizing it. You also reveal yourself by what you denounce

You see, by some people's reckoning, it is perfectly wonderful and enjoyable to mock the courage and sacrifice of soldiers defending freedom (you know the old "speaking truth to power" concept); but at the same time, completely outrageous and inappropriate to mock a demonstrably violent and murderous religion.

Let us see if Bill Clinton et. al bravely (and compassionately, of course) denounce the Toles cartoon as they did those depicting Muhammed; or if the silence emanating from their souls proves to be deafening.

UPDATE: This seems an appropriate response to those denouncing the Muhammed cartoons: 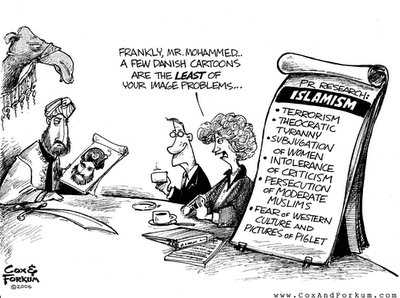