LOOKING FOR HUMOR IN THE MUSLIM WORLD

Instapunk extends the discussion from one of my previous posts, "Shame, Guilt, the Muslim Psyche, and the Danish Cartoons" (here) when he states the following:

To boil it all down to simplest terms, I'm suggesting that Japan has been able to retain vast parts of its traditional culture while coexisting with hugely different western cultures because its people acquired, finally, a sense of humor.

As with Dr. Sanity's perspective on shame culture, we are looking now at something that appears incidental or secondary but really isn't. A sense of humor is the great bridge between the prison of immature egotism and belonging in the greater world of humanity. Its possessor simultaneously views himself more humbly (and charitably) and others with greater wonder, appreciation, and pleasure. The ability to make a joke that causes others to laugh is one of the most direct sensory experiences of individual identity there is, and the ability to see that humor arises from the unexpected juxtapositions of great and small things is not to have learned a trick, but to have perceived a deep truth about life itself.

Dr. Sanity did not specify the fact that what she calls guilt cultures routinely exhibit a sense of humor about even their most sacred ideas.

Read it all. This is actually quite brilliant, I think, because it exposes one of the major problems with Islamic culture--the inability to step outside itself and see itself as others see it. If an individual is able to do that, then that person is usually mature enough to appreciate the healthiest and most appropropriate kind of humor, which absolutely requires a detached and observing self.

Humor as a psychological defense mechanism is considered one of the most mature and effective. Sigmund Freud himself, suggested that of all the defenses, "humor is the highest." George Vaillant, in his book The Wisdom of the Ego, states that, "The mechanism of humor is defense so subtle and so elegant that words fail."

Basically, humor permits the overt expression of feelings without individual discomfort or immobilization, and simultaneously without unpleasant effect on others. It allows people to face the most painful reality-- and yet respond almost playfully to that reality.

Humor requires maturity. It is a creative adaptation to sometimes a dangerous and frightening world. At its best, it is an expression of hope when the unbearable must be born. Most often, very young children are not able to appreciate the healthiest kind of humor simply because they are too young and their egos too fragile to be able to enjoy the self-deprecation and subtlety.

Just today my husband and I were recalling how the Boo, when she was 5 years old, became determined to write her very own "knock, knock" joke. She spent hours working on samples and would come back to us triumphantly with a list of them for our appraisal of which of the ones she wrote were the funniest. But she could not quite capture the concept of what made something funny, which was in itself funny to us, but insulting to her. It was all we could do not to laugh out loud at her rather delightfully UNfunny attempts. Wisely, we kept our chuckles to ourselves. While we never kept any of her efforts, they would go something like this:

Knock, knock.
Who's there?
Bird.
Bird who?
Bird who flies.

In other words, they were very...concrete. We would try to explain why it was not funny; comparing and contrasting with well-known knock-knock jokes. She would nod, and undeterred, go away and work on them some more. I still remember the first one she was successful at:

This joke came about over a year after she first began her attempts to create her own funny knock-knock joke.

How do you expain humor to a young child? They are not able to step outside themselves and view the world with the detachment necessary to create it. They are very sensitive to humor at their own expense and respond in a manner not unlike those in a shame culture. They are simply not able to see what could possibly be funny about anything they say or do--at least until they are much older and their sense of self is more developed and resilient.

I would add, that children have no problem laughing at others. An example is Nelson in The Simpson's, who goes around saying, "HA, HA" at everything and everyone else's expense; but doesn't particularly like it and becomes bullyish when the tables are turned.

The healthiest kind of humor is the kind that allows an outlet for pain and at the same time gives pleasure. It deflates without destroying; and exposes our pretensions before they are taken too seriously. The painful feelings that often underlie humor if expressed another way would be destructive or eat away at the soul. In this way, humor can be as redemptive as the most creative artistic endeavor.

Of course, all humor is not benign. Humor can be malicious and extremely primitive and exceedingly unfunny, particularly when it is meant to hurt.

I believe that motive is apparant in these cartoons that come from the Arab world; and which are particularly sadistic and humorless, considering that they are supposedly "cartoons". Such sadistic and even malicious humor can be very funny to a 6 year old (think of the "Itchy and Scratchy" cartoons that Bart and Lisa like in The Simpsons which are egregious in this regard). The overt hostility inherent in the violence is obvious to anyone who looks and detracts from any psychological benefit of the humor--either to the originator or to the observer. This particular kind of humor is actually a form of passive aggression or displacement--as are most of the cartoons from Arab newspapers linked above.

Contrast those rather sadistic and disgusting cartoons that depict Jews with blood everywhere killing babies and such; with the relatively mild Danish cartoons, several of which are actually fairly funny. 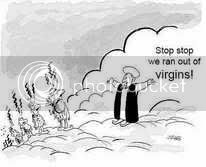 I happen to think the one of Mohammed in the clouds (on the right) telling the suicide bombers to stop because they had run out of virgins was quite good at making somewhat humorous a rather unpleasant truth. You, of course, are free not to agree with that perception. Clearly, some rather humorless Muslims could not get beyond the sense of insult and shame. But, unlike my young daughter, they are grown-up and must deal with the fact that it represents a truth they don't like--just as the JCS had to do about the Toles cartoon and I had to deal with Ted Rall's angry abominations.

My own sense of humor often has an underlying passive aggressive quality to it at times (visit my Carnival of the Insanities as evidence), particularly when I am very angry and/or very annoyed. But if it were to reach the sadistic levels of some of the Arab cartoons (instead of simply being childish), it would say something not very flattering about my own soul, which--while quite imperfect has hardly reached the depths of perversity, rage and hatred required to produce what Ahmadinejad considers funny.

Yesterday's ploy by Iran of publishing Holocaust cartoons for the purpose of demonstrating "free speech" is an example of sadistic kind of passive aggressiveness that demonstrates an absolute cluelessness about the origins and nature of humor. Valliant again on the subject:

A thumbtack in a teacher's chair is hilarious to a 6-year old but is profoundly irritating to and, in more ways than one, gets under the skin of the teacher. The hostile impulse is so obvious as to fool nobody. Only the user laughs. Thus, the sadistic humor of passive aggression is both childish and a sin.

As the years pass, the student's hostile impulse becomes more covert. The irate student's aggression become displaced into wit, parody and satire. The medical school faculty attend the student's skit. If they are not actually delighted to be lampooned, they still laugh, applaud, and control their displeasure--a reasonable compromise. No one is fooled by political cartoons, but in totalitarian countries, the distinction between displaced wit and passive aggressive mockery can make the difference between livelihood as a journalist and martyrdom in a concentration camp. Yet one does not need to be a Freudian psychoanalyst to appreciate that in medical school skits and in Mad Magazine wit is not all as it seems. Anger, sadness and sexuality have been wittily displaced.

Mature humor differs from both such displacement and passive aggression. First, mature humor requires sophisitcation (that is, social maturity) before the observer even "gets" the joke. People who laugh at New Yorker and Punch cartoons are older than people who laugh at thumbtacks in a teacher's chair or at cartoons of pigeons defecating on dignitaries. Second, in most adult humor the joke is on us, not on someone else. In the displaced, even sadistic wit of Tom and Jerry cartoons, the cat is the butt of the joke, and we identify with the mouse. In contrast, at Woody Allen movies and in viewing New Yorker cartoons, we laugh because it is our own foibles that are lampooned. Third, in mature humor, even the Freudian can never be certain from whence springs the secret energy of the joke.

Laughter--as in the case of the medical school faculty--is indeed, the best compromise when one is lampooned and the mark hits close to the heart. That is a sign of maturity.

The question becomes then, how does a society mature so that it is able to take such gentle mocking in stride--and perhaps, Allah willing, even learn something about themselves from it?

The important truth is that Iran cannot win a cartoon war with the west, despite the fact that even western ranks are debilitated by humorless fanatics on the extreme left and right. We have a couple-thousand year head start, and they have no sense of humor. There will be nothing funny about Iran's cartoons of the holocaust.

The irony of this situation was not lost at LGF, who posted the following cartoon that sums up the vast gulf in humor between the western world and Islam:

A little bit of insight and maturity would go a long way to decreasing that gap. But sadly, sometimes the only way both can be achieved is through the [needless] suffering that accompanies the consequence of the overt glorification and expression of the soul-destroying anger, rage and murderous impulses within.

UPDATE: No, I haven't yet seen Albert Brooks' movie Looking for Comedy in the Muslim World. I plan to eventually.
Posted by Dr. Sanity at 10:30 AM