Mark Steyn seems to agree with me that it is time for the West to, "Wake up!" and notice what is happening:

Something very remarkable is happening around the globe and, if you want the short version, a Muslim demonstrator in Toronto the other day put it very well:

''We won't stop the protests until the world obeys Islamic law.''

Stated that baldly it sounds ridiculous. But, simply as a matter of fact, every year more and more of the world lives under Islamic law: Pakistan adopted Islamic law in 1977, Iran in 1979, Sudan in 1984. Four decades ago, Nigeria lived under English common law; now, half of it's in the grip of sharia, and the other half's feeling the squeeze, as the death toll from the cartoon jihad indicates. But just as telling is how swiftly the developed world has internalized an essentially Islamic perspective. In their pitiful coverage of the low-level intifada that's been going on in France for five years, the European press has been barely any less loopy than the Middle Eastern media.

What, in the end, are all these supposedly unconnected matters from Danish cartoons to the murder of a Dutch filmmaker to gender-segregated swimming sessions in French municipal pools about? Answer: sovereignty. Islam claims universal jurisdiction and always has. The only difference is that they're now acting upon it. The signature act of the new age was the seizure of the U.S. Embassy in Tehran: Even hostile states generally respect the convention that diplomatic missions are the sovereign territory of their respective countries. Tehran then advanced to claiming jurisdiction over the citizens of sovereign states and killing them -- as it did to Salman Rushdie's translators and publishers. Now in the cartoon jihad and other episodes, the restraints of Islamic law are being extended piecemeal to the advanced world, by intimidation and violence but also by the usual cooing promotion of a spurious multicultural "respect" by Bill Clinton, the United Church of Canada, European foreign ministers, etc.

The I'd-like-to-teach-the-world-to-sing-in-perfect-harmonee crowd have always spoken favorably of one-worldism. From the op-ed pages of Jutland newspapers to les banlieues of Paris, the Pan-Islamists are getting on with it.

I don't know about you, but none of the "one world" fantasies that I have ever had included me and my daughter wearing a burqha. Nor did they ever include substituting liberty for oppression or living in abject slavery to some religion's brutal and bloodthirsty god. 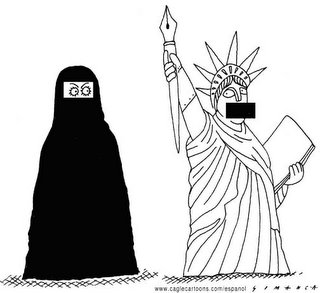 It is definitely time for the West -- particularly the left -- to wake up and get serious in dealing with this threat. 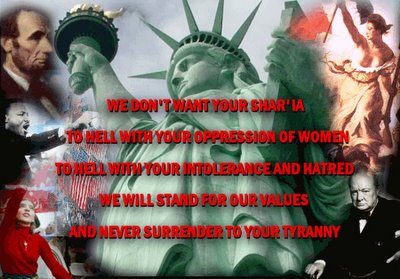