Meanwhile, Polly Toynbee of the Guardian is ready to cut a deal with the mullahs and, I suspect is also perfectly willing to don a burqha do do so. (hat tip: Wretchard) Hers is the kind of rhetoric wrapped up in "reasonableness" that takes us down the path to cultural and national suicide.

Reality suggests there is a difficult choice: if you cannot win, give up at once to minimise the damage. Get off the high horse and start to negotiate terms on which Iran can be allowed to enrich uranium. It amounts to turning a blind eye to their weapons potential while striking a deal that saves their face, affords them some dignity and entices them economically into becoming a more stable force.

Reality? Give me a break, Polly dear. There is a difficult choice, but it is not the one you describe. What you describe is surrender. And not only just surrender; but surrender without even trying to win. In order to let the mullahs save face, we should give up. And as Wretchard notes, not only should we surrender, but we should surrender cravenly.

Even if it is hopeless and there is a chance that we cannot win; and even if the available options aren't that good; I'd rather go down fighting for the values I believe in than simply give them up as you advise. You might as well don the burqha at the negotiation table--just to show how sorry we are for even imagining we can stand up to the bully of Islam and its fanatical gangs.

Polly Toynbee (and people like her) undoubtedly also would have given the same advice about the cold war and the west's interaction with Soviet Union in the 80's. She probably would have taught herself Russian and practiced being a good communist--just in case her version of "reality" came to be.

Useful idiots like Ms. Toynbee suffer from a type of hysterical blindness that comes from believing in an ideology that is just as consticting as the muslim burqha. 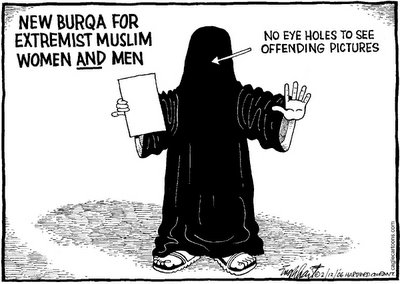