10 Ways Dick Cheney Can Kill You

Watch out! He's such a monster. (from Luciann.com, via The Corner) 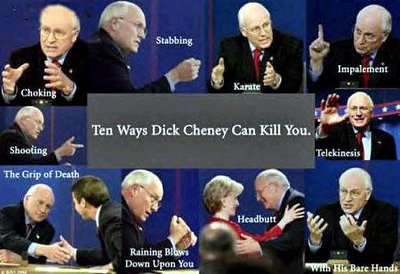 Mark Steyn has this to say to John Podhoretz about the latest greatest manufactured brouhaha:

But I can't see how the hunting thing is going to hurt Cheney or the GOP. For one thing, even when they've got the bones of a case, you can always rely on the Democrats and the media to over-react and, in so doing, come across as a lot of prigs. Already, NBC's David Gregory, the George Clooney of the press corps, has been huffin' an' a-puffin' all over the TV demanding answers - multiple answers - about why he had to wait 18 hours to hear about the accident. Who cares? A "sinister cover-up" has to boil down to more than not giving David Gregory a press release. And, given that the media's spent the last two weeks telling the public why they don't need to see these Danish cartoons, it's hard to take them seriously as sudden converts to the public's right to know every detail, if only when it comes to minor hunting accidents.

Well, yeah. But that kind of cognitive dissonance hasn't stopped them in the past.
Posted by Dr. Sanity at 9:40 AM