...there may be many opportunities for psychiatric input into the space exploration effort over the next 25 or more years. At the risk of sounding like the author of a science fiction story, I would like to suggest some areas of research that are purely speculative at this point but in which psychiatry may play an important role. The first area is in extraterrestrial psychology. A considerable amount of money has been spent on the search for extraterresrial intelligence (SETI). The field of exobiology has existed for many ears and has grown considerably since it was first speculated that life in the universe could be based on an element other than carbon, e.g., silicon. Only science fiction writers have made attempts to speculate on the differing psychologies that such biologically alien beings might have.

If scientists are correct and the probability is high that intelligent life outside of our own exist, the problem of communicating with and understanding such beings may become imperative. The scope of the problem is tremendous, not only in speculating how the different biology has affected the alien psychological development (which would certainly lead to a better understanding of the interactions among biology, psychology and environment in living organisms), but also in studying human response to the potentially infinite number of forms such life might take. 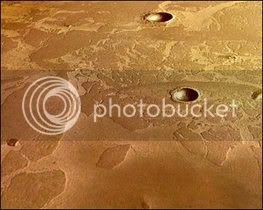 The image above was taken by the Mars Express spacecraft and shows what appears to be a dust-covered frozen sea near the Martian equator. The flat plain is covered with irregular blocky shapes that look just like the rafts of fragmented sea ice that lie off the coast of Antarctica on Earth. Such images are tremendously exciting because of the mereist hint of a suggestion of the possibility of life on the Red Planet.

Why is the possibility so exciting? Think about what it would mean if life in any stage of development were discovered there. The scientific, philosophical, and psychological implications would be incalculable.

If just one picture of the earth, floating in the darkness of space could lead to a paradigm shift in thinking about our planet; how much more explosive would it be for us to begin to see ourselves as just one life form out of many in the universe? The jumble of emotions that humans would experience at such a reality would run the gamut of all human emotion--exhilaration, anxiety, fear, yearning.

Well, we shall see if the latest claims turn out to be true...
Posted by Dr. Sanity at 9:50 AM