As far as I am concerned, there cannot be too much written documenting and increasing awareness about the abysmal situation of women under the religion of Islam.

Here is how International Women's Day was celebrated in Iran ((From the Students for a Democratic Iran Coordinating Committee):

Several Iranian women activists and some of their male supporters were beaten and arrested today, as they defied basic taboos of the Islamist ideology and Gender Apartheid enforcers of the Islamic republic.

Shouting slogans, like, "Na roosari, Na toosari!" (No Veil, No Submission!) the demonstrators were loud and defiant.

The protesters had gathered for the celebration of the "Int'l Women's Day," at Laleh Park located in the center of Tehran, when militiamen and plainclothes agents rushed them, as the brave female protesters removed their mandatory veils.

At least 50 women were arrested and seen transferred to regime buses that quickly left the scene. Regime security forces had previously closed most accesses to the area, in order to exercise ease of control and avoid more supporters joining the demonstrators.

Speaking to Pars TV, the SMCCDI Coordinator had declared, yesterday evening, the Movement's support of maverick Iranian women and asked for their protection. "It's the duty of every Iranian man to be at laleh Park and support their wives, mothers and sisters who are seeking to break the chains of slavery and discrimination" Pirouznia had stated.

The Islamic regime instated its' Gender Apartheid policy, following the 1979 revolution based on deep Islamist principles that established women as half a man and the source of temptation. Gender Apartheid proponents include "Abolhassan Bani-Sadr", the first president of the Islamic regime. An obvious fanatic and backwarded in his kind, he, Bani-Sadr, actually stated "the hair of a women is an emanating source of temptation that harms men's intelligence."

When I started my career in psychiatry, one of my earliest and most difficult cases was a woman--I'll call her Alice--who was seen frequently in the ER because her husband used to beat her fairly regularly. She had been hospitalized several times because of internal injuries from these beatings, but despite our trying to convince her to get help, Alice vehemently refused, claiming that she loved her husband and that he loved her. Her hospital room would be filled with flowers and cards from the repentant spouse. Both Alice and her husband would have nothing to do with us, and denied they even had a problem.

The last time I saw Alice, she was unconscious and being wheeled into the operating room after a particularly savage beating from her loving husband. She never made it off the operating table. I thought of how we tried desperately to warn her that the violence would not stop unless something changed. We literally had pleaded with her to let us help her the last time she was discharged from the medical unit.

Rarely since then have I felt so helpless or impotent as a professional. Rarely have I felt so angry about the kind of psychopathology and lack of insight that lead to situations like Alice's.

Since then I have come to realize you cannot force someone to change psychologically. The professional part of me understands that Alice had many opportunities to make a change in the toxic relationship she had with her husband. She had the opporutnity to get help; she could have stopped accepting his way of expressing his "love". She could have faced the reality of her situation. But she didn't, and now she was dead. The husband was convicted of her murder. And Alice, who was without doubt a tragic victim of domestic abuse, was at the same time a willing accomplice to her own murder.

Alice might have chosen differently. Most women in Islam cannot choose their fate. From birth to death they are ruthlessly oppressed and subjected to the medieval, misogynist attitudes of their religion and culture. In many Muslim countries they have as many rights as the family dog--perhaps less. I have little sympathy for apologists of this situation, whether they are male or female; religious or fanatic.

To those who claim that Islam is compatible with women's rights and self-determination, I say: DO SOMETHING ABOUT THE INSTITUTIONALIZED ABUSE AND OPPRESSION OF WOMEN UNDER ISLAM.

Individual cases of domestic violence clearly cannot be prevented in every case; and there will always be women like Alice and men like her husband in every culture or creed. But Muslims can stop justifying this psychpathological behavior as compatible and sanctioned by their religion. Until that religious sanction is withdrawn, claims that Islam is a religion of peace--or even that it is civilized--are laughable.

Personally, I have my doubts that the religion of Islam is compatible with equality and freedom for women. But if it is, then it will have to stop beating up 50% of its population in order to act out male fantasies of superiority, potency and power in the other 50%. Because if an individual, nation or religion has to act those fantasies out, the truth is that they are covering up and trying to compensate for the pathetic and desperate soul of a murderer.

UPDATE: If you think I am being unnecessary harsh on Islam, I urge you to check out the latest Arab TV transcriptions over at MEMRI :

Clip No. 509 - Discussion on Wife-Beating: Ten Toothpick Blows Do Not Cause Much Pain http://memritv.org/Search.asp?ACT=S9&P1=509

Clip No. 226 - Sermon on Qatar TV: With Some Women, Life is Impossible Unless You Carry a Rod

There are many more. If you can read the transcripts of these videos without wanting to vomit, you're a stronger person than I am. 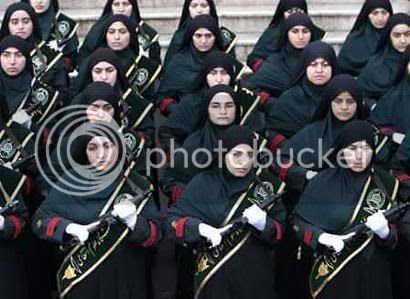 The immediate response is to laugh at how ridiculous these poor women look. But consider for a moment the kind of "policing" they will be asked to do for their masters. Just go back to the original link in this post for an example. They are a corps of Alices in black burkhas with automatic weapons, who will be used to efficiently ensure that other women cannot shout slogans, like, "Na roosari, Na toosari!" (No Veil, No Submission!)
Posted by Dr. Sanity at 6:51 PM