MEMRI has a comprehensive round-up of items documenting an increasing tension between Egypt and the U.S.

We have a whole host of anti-American cartoons with the obligatory comparison of Bush to Hitler in the Egyptian press: 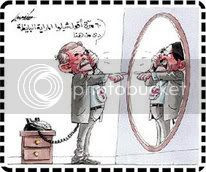 A whole host of articles that compare the U.S. with Nazi Germany:

Columnist 'Adli Barsoum wrote in the government daily Al-Gumhuriyya: "Egypt staunchly rejected American attempts to interfere in the MP Ayman Nour affair. America does not have any right to impose upon us its false role of defense of human rights, democracy, and free speech, when it has [both] an early and recent history of human rights violations in forms unknown to [even] Hitler's Nazis.
"The Ayman Nour affair is an internal Egyptian matter, whether a criminal affair, a political affair, or anything else. The Egyptian judiciary are the only ones who may express an opinion on this matter, and the Egyptian people are the only ones who may express criticism about it."

What has brought on this Egyptian frenzy of comparing the U.S. to Nazis (and to tsunamis destroying the world; and to cowboys beating up the world; and to Bush as an angel with cloven feet tricking the world --check out all the lovely cartoons at the MEMRI site)? The Egyptians are really really pissed because:
1. there has been a "frivolous discussion in the [American] media" of Egypt's domestic affairs, which, according to them, is not appropriate in relations between two allied nations.
2. there is a "negative atmosphere" created by leaks to the American media from various circles within the U.S. administration. The latest of which quoted American intelligence sources suggesting Egypt had been a partner in the development of Saddam Hussein's chemical weapons programs.
3. Secretary of State Condoleezza Rice's statements about the arrest of Egyptian parliament member Ayman Nour.
4. The postponement of Rice's visit to Egypt was mentioned as another source of tension between the two countries

Egypt is sooooo upset at all this,that Egyptian Presidential Spokesman Suleiman 'Awwad stated President Hosni Mubarak would not hold his annual visit to the U.S. this year!!

Big Pharaoh, an Egyptian blogger, has some insight into Egypt's sudden anger at the U.S.:

It was interesting to watch the editorials in the government owned newspapers the past 3 or 4 days. I noticed an unprecedented array of anti-America articles and columns that reminded me of the days preceding the war in Iraq. What happened? Well, the government unleashed its dogs.
This new offensive attack on America and its president started after Bush’s latest speech (where he mentioned that democracy is on the march in the Middle East) and the mounting US pressure on President Mubarak after Noor’s arrest. The first government official to attack the speech was Egypt’s secretary of state who ridiculed Iraq by referring to the bombs and killings there. Mr. Secretary failed to mention the 8.5 million purple fingers though!
I expect ferocious anti-Americanism to dominate the government owned media in the coming days especially after the government’s forced release of Ayman Noor. The government wants to tell us: hey, don’t forget that we’re not the cause of your ills, don’t ever think that we succumbed to US pressure, the cause of your ills is America, they occupy Iraq, they help Israel, they abused prisoners in Abu Ghraib, blah blah blah.

So, let me get this straight. Egypt's President Mubarak is so upset with the U.S. that he won't make his annual visit to Washington, eh? Boy, that will show those evil Nazi Americans!

Perhaps Mubarak is actually worried that President Bush might be a bit upset at Egypt's lack of democratic reforms? Perhaps Mubarak is just a teensy bit concerned that the U.S. won't give Egypt the annual check for "military and economic foreign aid"-- which last year was a mere $2 Billion or so? That the American gravy train isn't a done deal these days?

I just don't think the usual Egyptian blah blah blah is gonna work anymore.
Posted by Dr. Sanity at 1:13 AM