Some people will hang out with just about anyone for publicity. 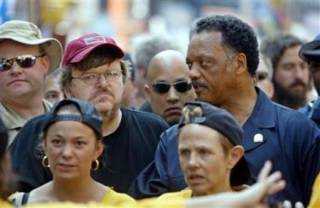 Moore and Jackson with protesters in NYC

UPDATE: LGF also has the photo and this comment on the "Moronic Convergence":

Director Michael Moore, left, is joined by the Rev. Jesse Jackson at the start of a protest march leading up to the Republican National Convention sponsored by the group United for Peace and Justice in New York, Sunday, Aug. 29, 2004. The Republican National Convention is scheduled to begin Monday. (AP Photo/Joe Cavaretta)
United for Peace and Justice is a moonbat umbrella group, comprised of every lunatic far-left organization and terror-supporting Islamist facade in the United States; here’s the mind-boggling list of Member Groups of United for Peace and Justice. Only three years after September 11—when New York and the entire US were grievously wounded by the ideological brethren of these America-hating freaks—they’re marching by the thousands through the streets of Manhattan.