The book cover comes from this site, which also has the pdf files for the entire book which Senator Kerry would like to pretend never existed. They comment:

"The picture below is the ORIGINAL cover of John Kerry's book THE NEW SOLDIER. John Kerry's friends, the so called Vietnam Veterans Against the War were mocking this scene photographed during the Second World War. 6,825 American soldiers died in the battle to take Iwo Jima before they planted that flag.

My father fought and was wounded on Iwo Jima, and it was one of the proudest moments of his life. When he died earlier this year, the U.S. Marines performed a formal flag ceremony at his funeral. I am the proud recipient of the flag they used. It sits on my fireplace mantel, a constant reminder to me and my family that he fought bravely for his country all those years ago. Look at the picture below in that context. 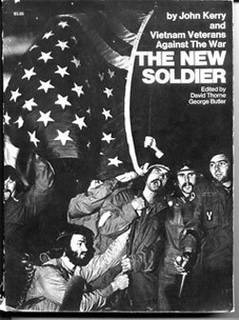 I hear that Kerry has lawyers waiting to sue anyone who posts this picture of the cover of his book "The New Soldier". I have three words to say: BRING IT ON