Apparently there is a great deal of anxiety in Washington these days that we are preparing to attack Iran. Victor Davis Hanson has this to say:

A new round of Middle East hysteria has broken out in Washington. It goes like this: Iran is not really such a serious threat; but once again we are cooking intelligence, ignoring moderates, being needlessly provocative, acting unilaterally and preemptively, looking for a mere pretext to strike, and refusing to try diplomacy. Supposedly Mr. Bush, if just for political reasons alone, can’t wait to face the bad choice of removing the Iranians’ centrifuges and the worst choice of letting them be.

That we have been engaged with Iran on and off for 27 years is forgotten. We are also apparently to put aside for a moment Iran’s breakneck efforts to get the bomb and forget its serial threats to wipe out the Israeli democracy.

This fear of American cowboyism is now widespread in and out of government. Consult, for example, the latest Newsweek cover-story exposé by Michael Hirsh and Maziar Bahari (“Rumors of War”), in which we are lectured about George W. Bush’s blundering: “The secret history of the Bush administration’s dealings with Iran is one of arrogance, mistrust and failure.”

For Newsweek, there is a weird (or rather, warped) sort of moral equivalence, in which Bush has become the doppelganger of Ahmadinejad, as evidenced by the cover photo of the issue showing a composite face—Bush and Ahmadinejad each contributing half (Bush, of course, being the right side, while the right-wing fascistic Ahmadinejad is on the left). The suggestion is that without these two similar extremists, there would a sort of natural détente between our two not so dissimilar nations: “In a warped parallel to Bush, who found his voice after 9/11 rallying Americans to the struggle against a vast and unforgiving enemy, the Iranian president rose in stature throughout the Middle East as he railed against America.”Apparently after reading this Newsweek exclusive, one is supposed to snicker at the pedestrian Bush idea that Islamic terrorism is “vast,” “unforgiving,” or really an “enemy” at all.

Meanwhile, consider this point made by Jonah Goldberg at The Corner :

CAIRO, Egypt — Iran's secretive Quds Force, accused by the United States of arming Iraqi militants with deadly bomb-making material, has built up an extensive network in the war-torn country, recruiting Iraqis and supporting not only Shiite militias but also Shiites allied with Washington.

Still unclear, however, is how closely Iran's top leadership is directing the Quds Force's operations — and whether Iran has intended for its help to Shiite militias to be turned against U.S. forces.

Me: First of all, thank goodness the AP says it's true because that means it must be.

Second, this has been discussed a bit already, I know. But, tell me, how does the top leadership in a totalitarian or authoritarian regime get to say "we were out of the loop"? The whole point of unfree societies is that the state is responsible for everything. They are the loop. They can't plausibly blame rogues or mavericks or suggest that some Iranian Ollie North was working out of some basement somewhere. Now, of course, there can be independent elements in any regime, but since when — and why — should the Iranian regime get the benefit of the doubt here? I mean if we learned that Canadian troops were "enmeshed" in Iraq, I think we'd all agree that it must be some sort of rogue operation at work, until proven otherwise. But Iran? Perhaps the world's chief sponsor of terrorism is supposed to get the presumption of innocence? It's just weird to me.

Yes, let's examine for a moment the idea that a regime that has been making war against us for 27 years (without a significant response by us, by the way, in all that time) is somehow not perceived as a threat and does not generate much anxiety; but the President of the US who stands up against the terrorism of Saddam, Bin Laden, and Ahmadinejad and the Mullahs generates high anxiety?

This puzzling phenomenon has two psychological aspects. The first one is a very neurotic psychological defense mechanism known as "displacement".

Displacement is at the heart of Bush Derangement Syndrome.

The number of things that Bush has been blamed for in this world since 9/11 (even acts of God like Tsunamis, hurricanes and other natural disasters) is the stuff of major comedy. You name the horrible event, and he is identified as the etiologic agent.

What makes Bush Hatred completely insane however, is the almost delusional degree of unremitting certitude of Bush's evil; while simultaneously believing that the TRUE perpetrators of evil in the world are somehow good and decent human beings with the world's intersts at heart.

One way you can usually tell that an individual or group is using psychological displacement is that the emotion being displaced (e.g., anger) is all out of proportion to the reality of the situation. The purpose of displacement is to avoid having to cope with the actual reality. Instead, by using displacement, an individual is able to still experience his or her anger or any other emotion, but it is directed at a less threatening target than the real cause. In this way, the individual does not have to be responsible for the consequences of his/her anger and feels more safe--even thought that is not the case.

This explains the remarkable and sometimes lunatic appeasement of Islamofascists by so many governments and around the world, while they trash the US and particularly Bush. It explains why there is more emphasis on protecting the "rights" of terrorists, rather than holding them accountable for their actions (thier actions, by the way are also Bush's fault, according to those in the throes of BDS). Our soldiers in Iraq are being killed because of Bush--not because of terrorist intent and behavior. Terrorist activity itself is blamed on Bush no matter where it occurs.

Even 9/11 itself is blamed on Bush (either he didn't do enough to prevent it in his first 8 months in office; or, he and Cheney planned and executed it to enhance their own power, etc. etc. etc.)

A second aspect to the increasingly hysterical rage that Bush has been the focus of, particularly recently as he struggles to deal with the dangerous situation of Iran and its obsession with obtaining nuclear weapons, is the heightened anxiety of his attackers because they fear he will actually do something.

Note, that both the anxiety and hysteria are directed at Bush et al and NOT at Ahmadinejad and the Mullahs, who have specifically repeatedly what they intend to do if they should obtain such weapons. Yet, the MSM and the political left, including the Democrats in this country, believe that not only will their nuclear weapons be used for "peaceful purposes", but also are convinced that Iran is sending IED's to Iraq for these same "peaceful purposes." It would be funny if it were not so incredibly irrational and extremely dangerous.

Anxiety is normal emotional and physiological response to feeling threatened. But when it is combined with displacement, it is exceedingly risky.

Imagine that you are standing in the middle of a road with your spouse and a powerful truck is bearing down on the two of you. You are naturally frightened and the biological hardware that automatically protects you in such dangerous situations kicks in. However, instead of jumping out of the way, you turn toward your spouse and start screaming with anger and rage about how it is all his fault that the truck is speeding toward you.

The consequences of your decision to focus your ire on your spouse at that particular time are, unfortunately, quite obvious.

Thus, the first step in dealing with high anxiety and fear is to make sure that you are focused on the real threat that is bearing down on you.

Once you focus your cognitive abilities on completing that task, there are then two fundamental methods of dealing with the anxiety.

Anxiety is a very unpleasant sensation. It is well-known that avoiding fear-provoking situations or activities stops anxiety and brings considerable relief from the symptoms. In other words, by not facing your fear you feel better. Why make yourself more anxious? It seems very sensible to take steps to avoid a fearful situation--at least in the beginning.

In the short-term, avoidance may give you a sense of control and a feeling that you have conquered your anxiety and eliminated the threat. This is exactly what displacement also does. By focusing on a less threatening person or situation, you avoid dealing with the real threat, and temporarily feel more in control of the situation.

Your feelings about this are incorrect. The threat doesn't usually go away because you close your eyes; nor does it go away when you focus on a less threatening object. But, it is true that you do feel less threatened for a brief time.

The second method of dealing with anxiety is: -CONFRONTING/FACING THE PERCEIVED THREAT

Confronting the threat may in the short term increase your anxiety and can be very uncomfortable. Obviously it takes a great deal of personal courage to face what one does not want to face. The thing is that it is not the anxiety that kills you--no matter how bad it feels. It is the real threat out there that you are avoiding that finishes you off--particularly if you are ignoring it and focusing your anxiety and fear on something or someone who is trying to pull you out of the path of the truck.

Anxiety is actually an emotional red flag that signals something dangerous is threatening and that you have to do something about it. If you focus on dealing with a red herring; or simply focus on how scared and anxious you feel instead of determining the actual threat and dealing with it, you end up put yourself at greater risk.

So, what should we do?

Avoid the threat, close our eyes and pretend that it doesn't exist, and focus on something else?

Or, having rationally determined that it is the Iranian truck that is bearing down on you--and not the President or his administration that is the source of the threat-- acknowledge the seriousness of the danger and deal with it?

You can probably guess my recommendation. 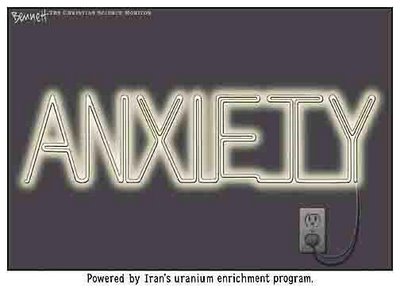 (This moment of high anxiety has been brought to you by Iran's Uranium Enrichment Program, which is for "peaceful purposes" only. I trust them implicitly, don't you?)
Posted by Dr. Sanity at 9:32 AM