ALL THE LEFT'S AGENDA IN A SINGLE CARTOON

Rarely do you find an example that so clearly demonstrates the real agenda of the neo-marxist fascism of today's political left.

In "The Four Pillars of the Socialist Revival", I identified four key epistemological and ethical strategies that provide the foundation of the ideological agenda of the socialist and communist remnants aggressively pursuing power in the 21st century. They are:

All these memes come together in the cartoon below: 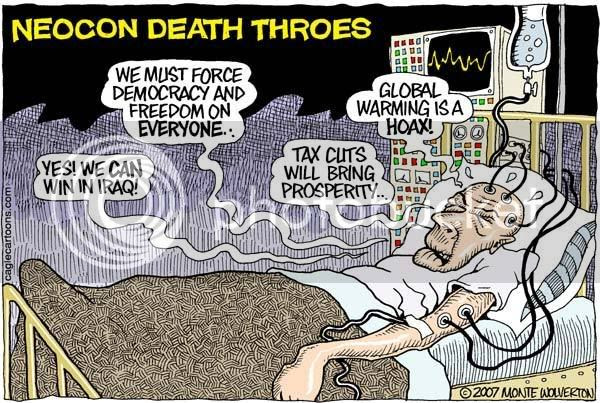 In a previous post, I wrote that what the world needs now is not less, but more neoconservatism.

Contrary to popular leftist fantasies, neoconservatism is not in its final death throes (though they would like it to be); nor is it on life support. On the contrary, it is the desperate neosocialist and fascist left whose failed ideological agenda is so threatened by the values of neoconservatism that is in dire jeopardy.

That is why they are so desperate for the U.S. to be defeated and fail in Iraq.

That is why they see no moral difference between cultures that promote freedom and democracy and those that promote tyranny and oppression.

That is why they have denied that the capitalist US economy is prosperous and booming and continues to lead the world economy (even under a Republican administration); or that their own ideology has only brought poverty and misery wherever it has been implemented.

That is why they are trying to equate "global warming denial" with "holocaust denial" and discredit anyone who disagrees with their totalitarian plans to deal with global warming; and insisting that the "debate" over global warming has ended.

All of the left's pervasive nihilism and fearmongering hysteria is packaged and promoted by their intellectual elites under the rhetoric of postmodernism; and the only intellectual remedy that exists to counter their agenda is neoconservatism.

Today's left is a nothing more than the hallow shell of what was once known as "liberalism"; and it is held together by the empty and meaningless rhetoric of postmodern intellectual nonsense, otherwise known as political correctness and multiculturalism (or, cultural relativity).

Neoconservatism as an intellectual theory actually arose from the observation in the 1960's that classical liberalism had been hijacked by the left and its essence literally reconstructed to develop a new and disguised agenda of socialists and communists who realized that the 20th century had exposed them for the anti-human thugs they were, and their political agenda for a complete and total sham.

All over the world it was becoming apparent that political and social collectivism was an abject failure. Where implemented, such policies led to intractable poverty and misery economically; and unbelievable oppression and the crushing of the human spirit politically and morally.

Multiculturalism and political correctness are two of the fundamental pseudo-intellectual, quasi-religious tenets-- along with a third: radical environmentalism--that have been widely disseminated by intellectuals unable to abandon socialism even after its crushing failures in the 20th century. These tenets have been slowly, but relentlessly absorbed at all levels of Western culture in the last decade or so--but primarily since the end of the Cold War.

The rise of neoconservatism represents the only modern intellectual counter and the only known antidote to the infection of postmodernism and its resultant toxic effects on philosophy, rehtoric, and politics.

In order to succeed in undoing and undermining the clear and unambiguous evidence of socialism's and communism's utter human toxicity, the totalitarians of the political left must undermine nothing less than reality, reason, and truth; and deconstruct and invalidate human consciousness itself.

Words and language are simply redefined to mean whatever anyone wants; history is rewritten--ostensibly to expose it's lies, but really to render it meaningless; and the ideas and values (like freedom and democracy) that are the foundation of Western civilization are mocked and shown by postmodern "logic" to be no better than any other random ideas.

Thus, freedom is just another word for nothing left to lose; and not significantly different from slavery; democracy is just as much a fraud as tyranny; and that which was always considered the good, is really just as evil as evil; and so on ad infinitum.

The history of Western civilization has been deconstructed and rewritten to conform to their moral relativism. Even the founding of America--the greatest and freeist nation in the world is contemptously declared to be "imperferct" and thus invalid and meaningless.

But consider, if we do not understand the past; if we abandon the ideas that underlie our values and our morality-- how can we appreciate who we are today? If we are only allowed to think of Thomas Jefferson and the other founders as a hypocritical colonial slaveholders, then we are forced to pronounce their ideas on the struggle for human freedom as no better and no worse than Hitler's kampf.

And so, Jefferson's mind-blowing, paradigm-shattering declaration, "We hold these truths to be self-evident, that all men are created equal, that they are endowed by their Creator with certain unalienable Rights, that among these are Life, Liberty and the pursuit of Happiness" has no more meaning or worth than Yasser Arafat's statement that, "Since we cannot defeat Israel in war; we do this in stages. We take any and every territory that we can of Palestine, and establish sovereignty there, and we use it as a springboard to take more. When the time comes, we can get the Arab nations to join us for the final blow against Israel." Both are either completely meaningless; or both are examples of freedom-fighters--who cares which? Bush = Hitler; Good = Evil; Freedom = Slavery; there is no way to judge because the nihilistic relativism we subscribe to has taken away our ability to morally distinguish and discriminate between right and wrong.

By disgarding reason and reality; by abandoning the past and embracing moral and cultural relativism, the left has brought us to this place where we are morally and physically paralyzed and cannot distinguish between the deliberate targeting and killing of innocents and the accidental killing of innocents despite herculean efforts to avoid it; between waging war to give people a chance at freedom and democracy; and waging war for domination and imperialism; between standing up for what is right and accepting the consequences, and abandoning one's values and surrendering with "honor" to the scum of the earth.

By mocking intellectual giants like Thomas Jefferson and dragging him through the postmodern mud; by equating Bush with Hitler; or the behavior of the Palestinians with the behavior of the Israelis; the actions of the U.S. military with the actions of the Islamofanatic terrorist thugs-- the left is desperately trying to numb the mind of the West. Who are we to judge? they scream, desperately trying to prevent history from judging their own unbelievable and pathological destructiveness, their own morally repugnant behavior and ideology.

This is their quest. To establish themselves as the arbiters of moral behavior by behaving immorally; of being "reality-based" without the necessity of having to acknowledge reality; of speaking "truth" to power, without being capable of recognizing truth (isn't all truth relative, after all?).

Just as the Saudis have let the wahabbi religious fundamentalism genie out of the bottle, inflicting it on Islam; so too has the political left let loose the genie of postmodern moral relativism onto Western civilization. The two genies have much in common since both work in tandem to destroy the human mind and spirit. Islamic fundamentalism is actively destroying millions by its soul-murdering ideology; while postmodern nihilists apologize and enable the barbarians at the gate , even as they destroy the very ideas that built the gate in the first place and which offers the only hope for liberating those millions from the boot of fanatical oppression....

[The leftists] elevate clowns like Hugo Chavez; swoon over despots like Mahmoud Ahmadinejad and Fidel Castro; have champagne toasts with fruitcakes like Kim Jung Il. And they admire and promulgate the propaganda of the worse barbarians and murderers in history. They fail to consider the logical inconsistency of their own relativistic arguments: all truth is relative, they say; but then they would have no basis upon which to assert that their "truth" (i.e., postmodernism) is anything but rubbish also. If all cultures are good, then why is Western culture uniquely evil?

The political left refuses to look unflinchingly at the consequences of their ideology or their behavior--and, as much as they want to deny it; as much as they demand people like me retract what I am saying, it is their ideas and their precious utopian nihilism that are the problems that must be addressed before we can win the war on terror; before civilization can address the evil in Darfur, Zimbabwe, North Korea, Iran, Somalia, Iraq and elsewhere. The left must be held to account for their malignantly narcissistic behavior. Envy is their dominant emotion; mediocrity and dragging humanity down to the lowest common denominator is their goal; tyranny and oppression is their modus operandi; and the greatest threat to their ideology is human freedom.

And those are precisely the reasons why neoconservative philosophy can rescue the West from the quagmire of moral and cultural nihilism that paralyzes us and limits our ability to fight the enemies of civilization.

We are led, by events and common sense, to one conclusion: The survival of liberty in our land increasingly depends on the success of liberty in other lands. The best hope for peace in our world is the expansion of freedom in all the world.

America's vital interests and our deepest beliefs are now one. From the day of our Founding, we have proclaimed that every man and woman on this earth has rights, and dignity, and matchless value, because they bear the image of the Maker of Heaven and earth. Across the generations we have proclaimed the imperative of self-government, because no one is fit to be a master, and no one deserves to be a slave. Advancing these ideals is the mission that created our Nation. It is the honorable achievement of our fathers. Now it is the urgent requirement of our nation's security, and the calling of our time.

So it is the policy of the United States to seek and support the growth of democratic movements and institutions in every nation and culture, with the ultimate goal of ending tyranny in our world.

These words are what neoconservatism stands for in the truest sense.

Thanks to the clueless cartoonist above, we can see the entire agenda of today's toxic political left encapsulated in a single cartoon. All the latest strategies to dominate and enslave humanity are in that cartoon and the pervasive psychological denial and projection stand out in stark relief.

But, if history teaches us anything, it is that those ideologies that attempt to suppress the insatiable human desire for freedom are the ones on terminal life support. In their last gasps they may appear to be regaining health and power, but death is imminent nonetheless; and they will be taken out with the trash to be buried along with all their previous historical incarnations.
Posted by Dr. Sanity at 8:30 AM