What the Democrats are doing with regard to the Iraq war is sickening beyond measure. This editorial from Investor's Business Daily calls it "Unparalleled Perfidy"; and they are exactly correct:

The party of John Murtha shamelessly seeks to defund and defeat U.S. troops on the battlefield and snatch defeat from the jaws of victory. The Congress the terrorists wanted is doing their bidding....

As we've noted on several occasions, Democratic talk of "redeployment" has encouraged terrorist groups around the world.

Jihad Jaara, a senior member of the al-Aqsa Martyrs Brigades, said before the 2006 vote: "Americans should vote Democratic," adding that "it is time the American people support those who want to take them out of the Iraqi mud." The statement could have come from Murtha, Kerry, Hillary or any number of Democrats.

We find it scary that the Democratic and terrorist game plans are indistinguishable....
Give us the tools and we'll finish the job, said Winston Churchill in the dark days before our official entry into World War II. America delayed its entry into both world wars, but once in, we were committed to win. Hillary thinks that applies only to her campaign, not to the war on terror.

Neville Chamberlain's naivete may have helped bring on World War II, but at least he supported his country when war began. Norway's Vidkun Quisling and France's Vichy government under Marshal Petain may have collaborated with the Nazi enemy, but after their countries' defeats, not before.

We'd have to go back to Benedict Arnold to find Americans as eager as Murtha & Co. to see an American defeat on the battlefield.

Brit Hume of Fox News is being bashed by all sorts of leftist "Benedict Arnold" wannabes for having the audacity to "smear" John "the troops deliberately kill innocent civilians" Murtha by saying the man doesn't have a clue.

Be sure to note that this criticism of Hume is coming from the side of the political spectrum that doesn't let any opportunity go by without some new and increasingly vile smear made on the President of the United States.

Anyone can demean and denigrate the POTUS in any way they want without comment by the left (it is "free speech" when they do it and "speaking truth to power"), but to insinuate--let alone state--that Murtha is a doddering, senile old fool causes their hackles to rise. (NEWSFLASH: they are the "power" now--just ask Nancy Pelosi and John Murtha)

These very same people were undoubtedly nodding their heads in sage agreement, awed by the perspicacity of a certain Al Qaeda thug who called President Bush an "alcoholic" and a "liar". Why, they've been calling him both for years now!

I find it extremely scary that the Democratic and terrorist rhetoric are indistinguishable....

What absolutely nauseates me most about the Democrats and their leftist thugs in the blogsphere is not their childish stupidity, with its reflexive anti-Americanism and concomitant treasonous acting out--those aspects of their insanity will deservedly come back to haunt them in 2008, if the Democratic party doesn't completely implode from the weight of its own imbecility; no, what is most sickening is the stunningly self-righteous, faux outrage about this news story.

Always the "champions of the oppressed" the victim pimps of the left rush to the defense of our brave military personnel when they are able to cast them in the "poor helpless victim" role. This happens intermittantly when they aren't able to cast them in the role of "vicious, evil oppressors"--you know, the one where they are characterized as serial rapists, defiling and killing innocents; or alternatively ignorant and uneducated, murdering mercenaries?

Frankly, my dear, they don't really give a shit at all about US military personnel, except insofar as they can be used to further their own treasonous agenda. This is just another opportunity to bash the Bush Administration and enhance their own image of caring compassion. As demonstrated here perhaps?

Benedict Arnold as you probably know, was a General in the Continental Army during the Revolutionary War. When his scheme to give British forces control of the Hudson River valley and split the colonies in half was thwarted, he managed to flee to British side where he was rewarded with a commission as a Brigadier General in the British Army.

I wonder if Zawahiri or Ahmadinejad are prepared to do the same for today's Benedict Arnolds? Allah knows, they certainly deserve it. 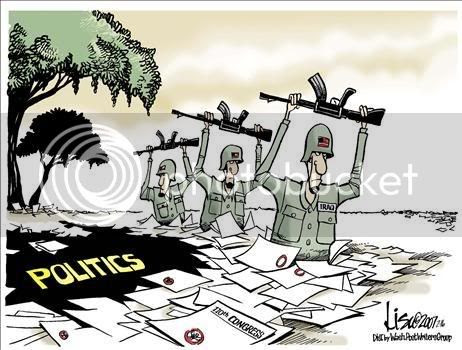