In an article that discusses the idea that religious belief is hardwired into humans, J.R. Dunn suggests that, when subverted or even conscieously abandoned it is "almost immediately replaced by another set of beliefs on a similar level of abstraction and serving the same purpose." One such replacement considered in the article is environmentalism:

That environmentalism is in fact a pseudo-religion goes without saying. Like all such, it possesses every element of contemporary legitimate belief. It has a deity, in this case the goddess Gaia, the personification of the living Earth, (first envisioned by James Lovelock, whom we can slot in as high priest). It has its holy books, most changing with the seasons, and most, as is true of the Bible with many convinced Christians, utterly unread. It has its saints, its prophets, its commandments, religious rituals (be sure to recycle that bottle), a large gallery of sins, mortal and otherwise, and an even larger horde of devils. (Let me pause here to sharpen a horn.)

Another item that a pseudo-religion must have is an apocalypse - and that's what global warming is all about.

In fact, the apocalyptic is the major fulcrum of environmentalism, the axis around which everything else turns. It's environmentalism's major element of concern, its chief attraction, and the center of discussion and speculation, in much the same way that some Protestant variants of Christianity are obsessed above all with sin. So crucial is the apocalypse to environmentalism that there has been a whole string of them, one after the other, covering every last aspect of the natural world. If one don't git ya, the next one will.

Green emphasis on the apocalyptic appeared early, accompanying the introduction of mass environmental awareness itself. Silent Spring, published in 1962, represents the first environmentalist scripture -- nothing other than a modern book of Revelations.

This is an excellent article that reviews the predictions of the priests of the environmental movement since the first of holy environmental scriptures was written (Carson's Silent Spring). In short, this pseudoreligion has been predicting imminent doom and global catastrophe for half a century.

Before the most recent global warming industry was popular, there were the imminent global catastrophes of pollution, overpopulation, universal famine, nuclear winter, and ozone depletion and just a short decade or so ago there was the global cooling scare. None of the predicted environmental catastrophes arrived on schedule.(As an aside, with a record like this, it is hard to understand these same purveyors of "imminent threat" having anything to criticize about Bush's decision to take out Saddam and his WMD programs)

Dunn notes that "global warming has actually adapted elements of all previous environmental crazes" and that the warnings have escalated beyond all reason. The recent release of the UN's report gives us only 10 years to prevent the environmental apocalype, but it will continue for centuries, and we are told that the "debate is over." Interestingly, on the same day the IPCC report came out, we also are told that scientists are being offered money to dispute the findings, and that the evil oil companies have made record profits in their evil scheme to destroy the planet. Even Presidential candidate Hillary was shaken by this evidence of oil company despicabiity and, channeling Hugo, stopped just short of declaring they should be nationalized. She simply proposed taking their profits away.

If you have not done so yet, I urge you to read Michael Crichton's excellent lecture given at Cal Tech on fear, complexity, and environmental management in the 21st century. It is all about chaotic and complex systems such as the earth's climate. Any proposal to change one aspect of that system has serious consequences (most of which are unpredictable) that in many cases might just be worse than the original problem.

Now, the problem of global warming is essentially a scientific one, as would be any solutions; but the entire thrust of the environmental movement has always been political. The bad guys have been identified (it is the capitalists, of course, and by definition America) and what we are witnessing is a grab for unlimited power. The only solution ever proposed are to give governments more and more power to control the villains whose actions are leading us inevitably toward doom (that includes you and I, by the way, since we drive gas-guzzling cars). After controlling the evil capitalists, they will need to control everyone's life, because by our very existence, we are contributing to the problem. It is no laughing matter that some of the high priests of this movement have called for the death of millions of humans to save the planet. (Dunn, btw, points out that millions have already died because of the environmentalists--consider the DDT hysteria of the 70's that led to the banning of this chemical, resulting in insect-borne diseases like malaria sweeping the globe).

I have written previously on the hidden agenda of the radical enviornmentalists, most of whom could care less about any scientific evidence one way or the other. They are merely concerned with implementation of their neo-marxist and fascist dreams of domination, and generating environmental hysteria is currently one of the more efficient ways of making that dream come true.

It is also important to note that by focusing the fears of the unwashed masses onto the imminent global warming apocalype, it makes it easy to ignore a threat that is not imminent at all, but which is actually right now at this moment spreading its darkness. And, in this respect, it is not a coincidence that terrorism is also one of the important pillars of the 21st century socialist revival (consider the diagram at the end of this post) 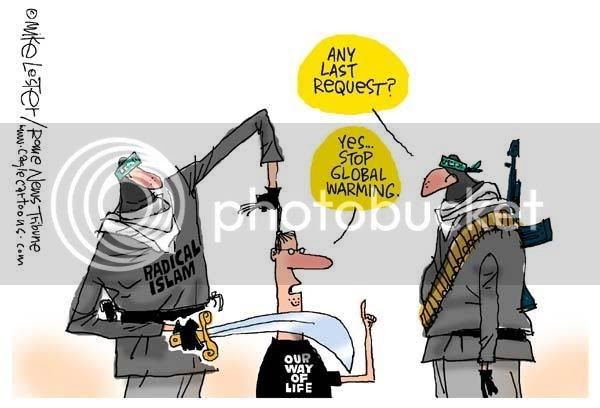 If global warming is a fact of nature that this planet has had to deal with since its birth within the cosmos, then it seem extremely likely that it will go its own way no matter what humans do or don't do. Instead of developing draconian government programs that foolishly try to prevent its inevitability then we should be focusing on developing plans to cope with it.

And, lest anyone forget in all the hysteria, human beings and human activity are just as much a part of Nature and the natural order of the universe as any other factor. Radical environmentalism --like all coercive utopian systems--is designed to change essential human nature and it will not be any more successful at that than any of those other utopian ideologies.
Posted by Dr. Sanity at 9:07 AM