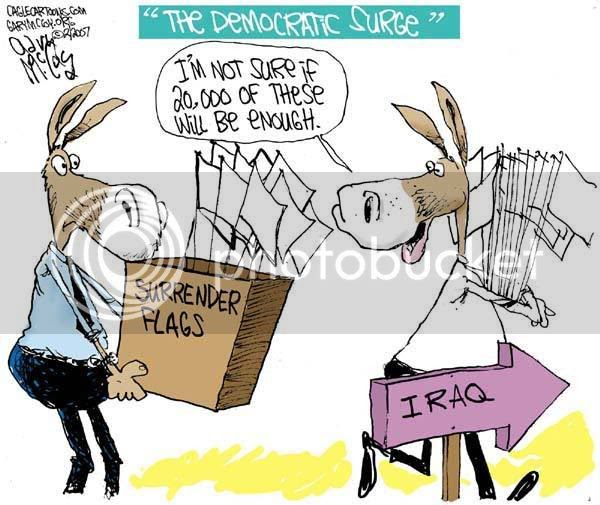 Jules Crittendon has more on the petulant Dems who just can't seem to fathom the depths of their cognitive dissonance. He writes of Pelosi phoning the President, demanding that he keep Cheney in line:

Apparently the president wasn’t home when she called. Or didn’t pick up. Or maybe he was making funny chimp faces at Josh Bolten when Josh Bolten was on the line trying to have a serious conversation with Madame Speaker:

Pelosi said she had tried to reach the president but was only able to get through to White House chief of staff Josh Bolten.

Bolten said he was certain no one was questioning her patriotism or commitment to national security, she told reporters.

“I said to him perhaps when he saw what the vice president said he might have another comment,” Pelosi said.

But this is a very important issue. Pelosi is trying to have a responsible grown-up debate. And here Cheney has the gall to talk about the enemy’s goals. Good Lord, what is this man thinking? What place does the enemy have in any discussion of strategy and tactics.

Josh Bolten is far too polite and PC. As I've mentioned before I DO question their patriotism...it's either that or their intelligence.
Posted by Dr. Sanity at 9:27 AM