ALL I AM SAYING IS GIVE REALITY A CHANCE

They say a picture is worth a thousand words, and nowhere is that more evident than in today's political cartoons (as discussed here, for example).

In fact, they make my job as a psychiatrist easier. For example, consider this cartoon: 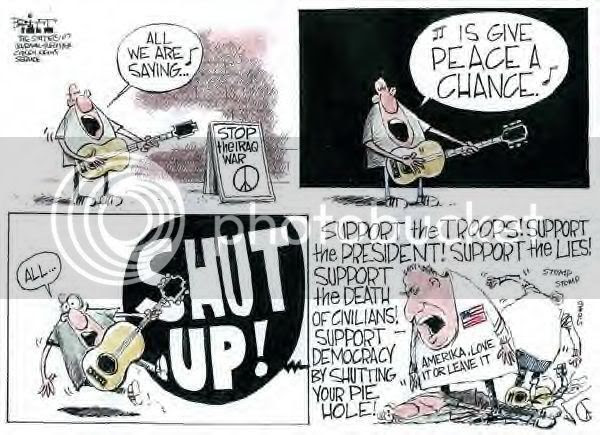 It clearly exposes certain key aspects of the self-image of those in the anti war crowd:


This image must comfort them greatly, since in fascist state that is America, this is the only kind of vile "persecution" they suffer when they dare to question the BushHitler.

Nevertheless, at the risk of catastrophically cracking that wondrous shell of narcissism they live in, I must point out that they desperately need to do a great deal of soul-searching and open their eyes to reality and get a grip.

For once in their pathetic and delusional lives--before it is too late for all of us-- they need to face the truth: that beneath the priggish self-righteousness; beneath that romantic and suffering image off moral superiority that they cultivate religiously, they have become nothing more than the appeasers and enablers of those who represent the very opposite of peace.

Here is reality--if they have enough of that courage to face it instead of the rightwing strawman they are constantly speaking their truth to:

...in 2006, the Palestinians imported 30 tons of explosives into Gaza from Egypt. Hamas has dug 10 tunnels into the western Negev from which it will be able to launch attacks against the IDF or against civilians. The situation along the breached Gaza-Egypt border is even worse. Diskin referred to the weapons and personnel smuggling tunnels there as "one big rabbit warren."

As the Palestinians prepare themselves for battle, this week they invented their justification for attacking the Jews. Just as they did in September 2000, this week Palestinian and Israeli Arab leaders opened their propaganda campaign for war by falsely accusing Israel of conspiring to destroy the mosques on the Temple Mount.

Like its excavation by the Western Wall that has been going on quietly for the past several months, the Israel Antiquities Authority coordinated its salvage dig by the Mughrabi Gate of the Old City with the Islamic Wakf, the Jordanian government and all other relevant authorities before its archeologists began their work this week. Everyone understood that the excavation is being conducted 70 meters away from the Temple Mount and will in no way affect it.

But facts are irrelevant. The Arabs are not interested in the facts. They are interested in war. Sheikh Abdullah Nimer Darwish, the head of the southern branch of the Israeli Islamic movement, made this point clearly Thursday morning when he told Israel Radio that the war will likely begin when the heads of the Palestinian Authority, Mahmoud Abbas and Ismail Haniyeh, return from Mecca.

It would seems obvious to even a child that the biggest imepdiment to any real or lasting peace is not conservative or neocon ideas; not capitalism; not America or Israel; not, in short, any of the strawmen so carefully set up by the cowardly left just so that they can feel good about themselves.

If they care to demonstrate real courage, then I suggest the leftist antiwar clowns speak their peaceful truth to the real warmongers and barbarians. Of course, they should then bravely prepare themselves for the real persecution and oppression they will likely suffer as a result.

Come on, guys. All I am saying is give reality a chance....