Go ahead and celebrate; take your best shot: 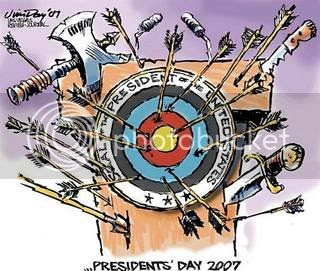 As for me, I will trust my own judgement and stand by the President.

Sometime back I wrote a piece about why I like George Bush--in spite of his flaws; and in spite of all the unrelenting criticism, hysteria and hatred that is thrown his way on a regular basis.

As we finish the last two years of Bush's Presidency, we are witnessing "end stage" Bush Derangement Syndrome, which manifests itself by the histrionic and blind hatred of anything the President does or does not do.

This "end stage" BDS--like terminal syphilis--has culminated in blindness combined with an insanity so profound, the consequences to those who suffer it--as well as to our country--will likely be quite profound, if not lethal, since they hinder and undermine this country's ability to deal with real threats . (cartoon by Eric Allie ) 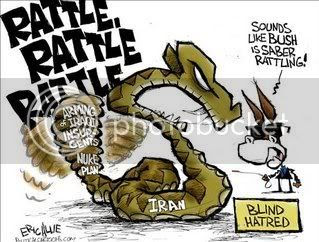 Consider for a moment the unbelievable stupidity in the argument that we shoud automatically distrust intelligent regarding Iran's less than helpful activities in Iraq (which I discuss in these two posts).

Today, Michael Barone who is probably one of the most sensible persons you will find has this to say about the misuses of intelligence (both the military and the IQ kind)--and, please read it all:

Last week, we had a couple of object lessons in how to use -- or misuse -- foreign intelligence....

The New York Times laments that America is "bullying" Iran. Actually, the mullah regime has been bullying the United States for 28 years.

So why the suspicion? The answer seems to be that because intelligence erred in its judgment that Saddam Hussein's regime had weapons of mass destruction it could be erring here, too: All intelligence that could be used to justify military action is inherently dubious....

Indeed it is not. But what can you do when every word and action is driven by an unrelenting hatred that consumes the soul, corrodes common sense and severely impairs judgement and behavior?

On this President's Day, I think about the very ordinary, honest, and human qualities that I find compelling about George W. Bush. He continues to strike me as a very REAL person--and not a slick "persona" created by an ad agency; or a "celebrity" onto whom we project our own fantasies (unlike Obama the Magnificent).

With all his coaching, Bush still manages to misspeak and mispronounce even in his most important speeches; and, even more to the point, like all of us ordinary mortals, he makes mistakes. Yet he continues to work to find solutions to impossibly difficult problems and has always been impeccably kind and gentlemanly (as well as forgiving) of all the rage and bad behavior directed his way.

He is even able to make fun of himself and his personality as this video testifies. What this bit of humor shows more than anything else, is a mature individual who is comfortable with who he is and capable of insight and self-awareness. That he can joke about it displays a lack of any excessive or malignant narcissism, which is actually quite remarkable in today's politics.

Of course, no politician/celebrity these days can exist without cultivating that carefully crafted persona, but nevertheless, all my instincts about people tell me that Bush is real; that he is honest; and that he always tries to do what he thinks is the right thing to do, no matter how popular it may or may not be.

This post at The Corner about sums it up:

[...]recall the presidents this country has known (and will know) who were obsessed with their own popularity. Think of the many times Bill Clinton allowed polling data and political advisers to shape military strategy. Imagine how horrifying it would be right now to have a John Kerry or Al Gore as president — no clear statements of policy, military decisions transparently shaped by "how it's going to look", a White House that smells to high heaven of vacillation, weakness, and even corruption. Imagine all of this for a second — and then consider the President's response:

THE PRESIDENT: Thank you. Look, Presidents care about whether people support their policies. I don't mean to say, I don't care. Of course, I care.... On the other hand, Ken, I don't think you've ever heard me say — and you've now been covering me for quite a while, 12 years — I don't think I've — 12 years? Yes. I don't think you've ever heard me say, gosh, I'd better change positions because the polls say this or that. I've been here long enough to understand you cannot make good decisions if you're trying to chase a poll. And so the second part of your question is, look, I'm going to do what I think is right, and if people don't like me for it, that's just the way it is.

Bush has virtually never in his political career made a decision that he didn't think was the right thing to do and the right way to do it. Conservatives who are piling on the anti-Bush bandwagon should consider that this trait—which makes the Bush family historically great—is a historical rarity to be treasured....

But it was not so long ago that Americans could only wish for a president who was obviously trustworthy, upstanding, and principled. And the day is not far off when we will think ourselves lucky to have seen this President defend the honor and integrity of his office—and the American people—for eight years. The times are difficult, and nobody could have gotten through the last five years without making mistakes. But in that station to which God called him, George W. Bush has been himself honestly, and thank God for that.

Yes, thank God that we have a president that will not chase the polls; nor does he desire popularity above all else. Bush is a rarity in politics, and one that I sincerely treasure for all his faults.