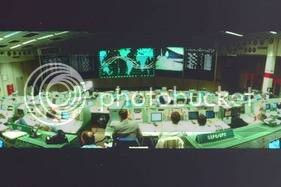 One of the most exciting and fun parts of being a NASA flight surgeon was working in Mission Control at the Surgeon's Console during space missions. While doing this, I would occasionally allow myself--when things were slow-- the luxury of fantasizing that I was on the bridge of the Starship Enterprise, my mission to explore new worlds and...well, you know the rest.

There are exceptions, of course, but most space missions are "routine" (if that word can ever be used in the context of space) compared to the all the disasters and catastrophes that the flight controllers train for. If you think about this, you will realize that if all the controllers did was work on the "routine" missions, they would hardly develop the competency to deal with the unexpected and possibly life-threatening situations that crop up from time to time in the always dangerous space environment.

Prior to every mission flown there are months and months of simulations in Mission Control that all the flight controllers participate in. And believe me when I say that during these simulations, everything goes wrong. Things go wrong that each control area might reasonably expect could go wrong; and things go south in ways that no one would ever expect.

Once you get into it, the simulations become almost eerily as real as an actual mission. The flight data is presented in the same way; the crew interact with the flight controllers in the same way, etc. etc. In fact, as I think back on some of the Shuttle missions that I supported as the surgeon during my time at NASA, I realize that it could be very easy to get confused about what happened on the real mission and what happened during some of the simulations! Because, both experiences felt real.

That's how cleverly the sims are constructed; and how carefully they prepare the flight controllers who support flight operations for real space missions.

Once, for a space medicine conference, I put together a Mars Mission medical simulation using an operational control room at a Challenger Center. The flight controllers were doctors from various specialties who were working with a Mars "crew" who followed a carefully constructed script. Several crew members had been injured in an accident out on the planet surface and the crew at the Mars base station had to go rescue them. The rescue was made urgent by simulating signs of an imminent major solar flare. All personnel had to reach the safety of the radiation protection areas before being exposed to a potentially lethal dose of radiation.

Things were going along smoothly and the novice flight surgeons had assisted the crew in stabilizing the injured and were ready to transport them back to base (we even simulated the time differential that would occur in communications between the red planet and earth). Then something completely unexpected occurred. The Commander (CDR) of the crew, one of the injured, began to act very strangely and unpredictably.

It took quite a while for mission control team to realize that something very bad was going down--not only for the CDR, but for the entire crew who were now trying to deal with the irrationality of the CDR who was interfering with the rescue effort.

As one of the SIMSUPs (simulation supervisors), I watched as everyone in the control room began to go into panic mode. The controllers began to argue with each other over what was happening and what to do. People yelled. The person who was the "Flight Director" for the simulation tried to get everyone calmed down so that they could deal with the problem. But, it was too late. The CDR was now out of control and endangering the other members of the crew because of her irrational behavior.

We came to the end of the simulation, and everyone looked around ruefully, recognizing that they had not identified the problem and the mission had failed because the crew was exposed to lethal doses of the radiation. We all adjourned to a nearby conference room and spent the next several hours debriefing and discussing all aspects of what had happened, and (with the magic of simulation) were able to bring the Mars "crew"(completely unscathed) into the control room to participate and offer their critique.

In the end, the sim participants all agreed that it had been a very realistic exercise. They had actually experienced to some degree quite a variety of emotions during the simulation that might have occurred if there had been a real medical emergency at a Mars Base.

Even the crew (who had not been told the content of each other's scripts) were amazed at how stongly they reacted to the sudden change in behavior of the CDR, who had become increasingly irrational and belligerent. As it turned out, even though everyone participating were physicians, they all had failed to consider that the CDR's behavior was the result of a very small leak in her spacesuit, acquired during the accident, that was slowly causing her to be anoxic--a possibility they should have anticipated, but had not been considered because everyone had become extremely angry and annoyed at the CDR's strange behavior-- instead of appreciating it as a symptom of her recently sustained injuries.

This story is my segue into discussing one of the least appreciated, but most mature, psychological defenses. It happens to be one that I am particularly fond of (it appeals to the obsessive side of my nature) and it is known as anticipation.

Anticipation is defined as the realistic planning for future discomfort, and it involves something more than simply making long to-do lists, or even obsessive and careful planning for some event in the future. In particular, it necessitates both thinking and feeling about the affective components of potentially stressful or threatening future events.

In a way, anticipation is a psychological strategy that spreads out anxiety or other distressing emotions (e.g., fear, anger) over time. The advantage of this approach is that, like a psychological immunization, the process slowly allows the individual to accommodate to what otherwise might be an emotionally or physically overwhelming, or impossible-to-handle situation.

George Vaillant in his book The Wisdom of the Ego (page 71-2) has this to say about the psychological defense of anticipation:

Anticipations involves realistic and affect-laden planning for future discomfort....[of] all the mature defenses, anticipation rearranges outer and inner reality the least. Rather than use self-deception, anticipation spreads anxiety out over time. It involves self-inoculation of taking one's affective pain in small, anticipatory doses. Anticipating that he might be assasinated, King Mithridates VI became a legend by taking small doses of poison every day to build up his tolerance and protect himself from dying of poison. In the words of the psychoanalyst Heinz Hartmann, one of the pioneers of ego psychology, "The familiar function of anticipating the future, orienting our actions according to it and correctly relating means and ends to each other...is an ego function and, surely an adaptation process of the highest significance."
[...]
Anticipation is different from isolation and intellectualization in that it does more than just the busywork of cognitive planning and making lists...Anticipation is different from fantasy in that the subject experiences modest affective distress during realistic worrying rather than the autistically bland daydreams of disasters and/or wish-fulfillment.

Finally, it is important to distinguish the dissociation that leads to the "laid back" behavior of the cockeyed optimists and Pollyannas from the capacity to remain calm under stress that results from anticipation.

It is fair to say that most aviation and space cowboys survive in their chosen profession because they are able to accurately as well as affectively anticipate potential threats, without underestimating or downplaying them. They know all too well that the space is an extremely unforgiving sort of environment. It does not suffer fools gladly; nor does it cut those in psychological denial any slack.

The purpose of all the hours of realistic simulation is literally to develop mission control--or rather, to facilitate the development of behaviors and psychological responses that will bring about a successful mission. The Mars Medical Simulation described above--which attempted to anticipate a few of the many potentially serious medical problems that might confront a space crew and medical controllers in a very challenging environment, was successful precisely because it forced them to acknowledge how their feelings might interfere with doing their job in a particularly stressful and dangerous situation.

In the world outside of space, or aviation, or other stressful or risky professions, anticipation is not used nearly often enough to learn to cope. The truth is that most people don't much like to think about situations that might cause or result in emotional distress at all, let alone plan in any way for it. And that is the major reason why anticipation is a psychological defense that frequently requires a social structure or network that supports it and encourages it. When such a network is present, it can facilitate anticipation, preparing individuals to face any number of future realities and develop strategies to cope effectively, no matter how challenging, dangerous, or frightening it may be.

Or, the social structure can encourage people generally NOT to think about such things; to put off, displace, project, and use any number of other less mature or less effective psychological defenses to deal with threats. Totalitarian societies are particularly good at this in order to manage people's emotions and behaviors and keep them focused externally. That is one way to consolidate power and control in such regimes. But even in democratic and free societies, there is a tendency to look away from reality and redirect one's focus on the less-threatening, more comfortable and the safe.

Denial, in comparison to anticipation, is much less complicated and easier to encourage since the avoidance of pain or distress is human nature. Denial is simply a negative: an erasure of unpleasant facts or emotions in order not to feel the anxiety or fear they might generate. As a very temporary strategy is may be useful, but as a means of coping with life or death situations, it can be lethal for both individuals and societies who engage in it.

When a situation is expected to be emotionally positive, or even neutral, then it is easy to anticipate and plan (e.g., vacations or housecleaning). But when highly emotionally charged and frightening events need to be confronted--like death or war--it takes a great deal of maturity to be willing to turn toward the fear and manage one's feelings appropriately so that the threat can be defused.

Reality exists independenly of our thoughts and feelings. Anticipating some of the emotions and practicing or rehearsing how we might cope with what life throws at us gives us a powerful emotional and behavioral skill that can help us manage future threats to our well-being without either overhyping or minimizing them.

Overhyping the threat leads to the very anxiety and paralysis one is trying to avoid to begin with; but minimizing it leads to denial--with an initial seductive calm, followed inevitably by the unstoppable rush of reality.

Optimal mission "control" depends on negotiating a path between the two extremes.
Posted by Dr. Sanity at 7:45 PM