MIDNIGHT AT THE OASIS

It's midnight at the oasis and once again, that elusive 12th Imam has not shown up for the appointed apocalypse. But in keeping with the spiritual mindset of the occasion, the leaders of Iran have rejected demands to halt their nuclear efforts. OTOH, they appear to be ready to begin "serious talks".

Does anyone else find this ridiculously contradictory discourse familiar? In essence we are being treated to left's precious postmodern rhetoric, translated into Farsi.

Perhaps the left, wallowing in a cesspool of denial and fantasy, believe the Iranians really are "serious", and they should be given another chance by the international community before it takes the draconian step of imposing sanctions that are unlikely to have any effect anyway.

Well, I certainly wouldn't be surprised. When it comes to delusion, the Iranian leaders and the lunatic left have quite a bit in common. 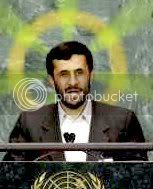 The Baron suggests that I mock Ahmadinejad-- and I hear and obey!

(with apologies to Maria Muldaur)


Midnight at the oasis
Send your camel to bed
The mullah's smiling faces
Must be a little red.

They awaited an imam
12th in line by Allah
But he slipped off to a sand dune, last June
And won't be back, inshallah

The mullahs have the answer
There's no need to think
Mahmoud's their belly dancer, prancer
Can't you smell the stink?

I know your Daddy's that imam
Who's been hiding in a well
With fifty girls to attend him, they all send him
Deeper into hell

Mahmoud's got his halo, honey
Glowing round his head
And he won't need no virgins, no no
When he's finally pronounced dead.

Midnight at the oasis
Send your camel to bed
The mullah's smiling faces
Must be a little red.
Posted by Dr. Sanity at 7:23 PM