From The Anchoress, discussing that "random, road rage incident" in San Francisco yesterday:

Can you imagine, if someone had (God forbid!) driven a car into 14 gay people, how quickly the press would have managed to cover the story? Can you imagine that Mayor Newsom would call it “road rage” and suggest that there really probably wasn’t a “hate crime” attached to the action?

I swear, these people are tempting me to some vile language.

And then there's this from the world's #1 Holocaust denier; a person so completely obsessed with the Jews, one has to wonder if he may be denying his own Jewish ancestry (wouldn't that be interesting):

Iranian President Mahmoud Ahmadinejad has told German Chancellor Angela Merkel that the Holocaust may have been invented by the victorious Allied powers in World War II to embarrass Germany.

The remarks by the outspoken Iranian president, who has repeatedly questioned the veracity of the Holocaust, came in a letter sent to Merkel in July whose contents have not been disclosed until now, according to the news agency Mehr as reported by AFP.

"Is it not a reasonable possibility that some countries that had won the war made up this excuse to constantly embarrass the defeated people ... to bar their progress," Ahmadinejad said in the letter.

"The question is if these countries, especially Britain, felt responsible for the Holocaust survivors, why they did not settle them in their own countries?" it said.

The full text of the letter to the German Chancellor can be found here.

The Iranian Reich seems to be on a roll. This is the second in a series of important letters that Ahmadinejad has written to world leaders (the 18-page letter to President Bush can be found here); and the Iranian president has challenged Bush to a "debate" so that Iran can "voice its point of view on how to end world predicaments."

Ahmadinejad also had the incredible gall to even put conditions on the debate, insisting: "But the condition is that there can be no censorship, especially for the American nation." This, from a man whose own people live under a regime of oppression that crushes individual freedom and speech.

Reading the two letters reminds me of one of my dirty little jobs at NASA. Because I was the only psychiatrist civil servant, most of the "crazy" letters that came into the Agency, no matter at what level, eventually found their way down to me to answer. There were 300 page missives from people who claimed to describing that elusive Unified Field Theory (of life, the universe, and everything) and wanted NASA to immediately hire them; letters proposing recycling astronaut's urine as drinking water; and letters with even more bizarre recommendations and analyses for NASA scientists. There were letters demanding that NASA stop monitoring the author's brain; letters that accused NASA of being in a world-wide alien conspiracy to take over the Earth; and letters that you absolutely wouldn't believe even if I told you about them.

NASA officials insisted that every letter have an "official" response (good PR, you know), so the "official" shrink was delegated to reply.

In other words, I have some experience answering the deluded and paranoid; the grandiose and psychotic when they write desperate letters to important people in order to enhance their visibility and shore up their disintigrating self.

Fortunately, none of those letters to NASA that ended up on my desk for a response, were attempting to facilitate the end of the world; and if they did, none seemed to have the means with which to accomplish it. I took a lot of care with the letters I composed, trying to be unprovocative and simultaneously encourging the letter-writer to get some psychological help.

But what is going on these days in our press, and on the left; as well as in the mind of delusional fanatics like the Iranian president, cannot be dealt with by sweet and soothing diplomatic words.

Ahmadinejad displays for all to see an unbelievable degree of paranoia and delusion in his rambling letters to world leaders. It is clear that he wants to be taken as a serious thinker and allowed into the halls of world power. He even believes his ticket into that hall is his delusion, and that he can get enough people in the clueless west to agree with him--or else just shut up about it. When that happens, there will be nothing that prevents him from acting on his desire to "solve" what he perceives as the world's most significant problem--the Jews.

It is useless to point out to him that he is insane with hatred. It is useless to expect an sudden epiphany of insight and self-awareness will strike this maniac down on the road to Damascus (or Tehran).

But I don't think it is too much to expect that our own media and our own intellectual elites take a good, long look in the mirror and come to appreciate how, little by little, they are actively contributing to the Islamic fanatics' agenda.

To further extend The Anchoress' thoughts: what the hell is wrong with the political left that they want to close their eyes to this evil as it spreads over the world even darkening areas of our own country?

The stench of denial is pervasive and toxic.

The media, the left, the Democrats--and even some on the political right-- all continue to behave as craven apologists for this new Reich; even as the tendrils of its sick ideology extend out and lock onto the souls of weakest in our society. The morally and intellectually bankrupt elite of the left, whose rage knows no bounds when hapless Republicans utter imaginary slurs like "maccaca", are strangely silent and complicit when real evil rears its head and emits its foul breath.

Ahmadinejad's mere existence is an embarassment to truth; but the apologists, appeasers and enablers for the murdering death cult of Islamic totalitarianism surely must make truth weep. 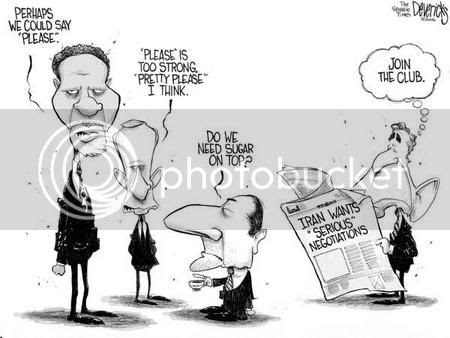