From the WSJ today:

Two months ago the U.N. Security Council offered Iran a choice: Stop enriching uranium in violation of its treaty agreements, and the world would negotiate better diplomatic and commercial relations. Keep enriching the fuel for nuclear weapons, however, and face isolation and sanctions. Tehran's rulers have now given their answer: They won't stop enriching uranium, but they're happy to keep talking about it.

Yesterday, the Bush Administration said it is still studying the Iranian proposal but that the reply "falls short of the conditions set by the Security Council." You can say that again. After three years of Iranian stonewalling since their nuclear deception was discovered, the June resolution was deliberately written to make an end to enrichment a first-order obligation.

The carrots are supposed to follow, not precede, Iran's promise not to take further steps toward becoming a nuclear power. Iran's reply looks like a calculated attempt to conquer the Security Council by dividing its members with the promise that more talk might some day, down the road, in return for who knows what, lead Iran to stop going nuclear.

Does this happen to remind you of anything? The same game currently being played by Iran with the international community reminds me of Peanuts. Think of Lucy as Ahmadinejad and the hapless Charlie Brown as the U.N. (thanks to M.B.!) 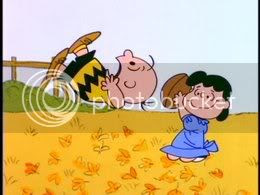 But Charlie Brown, dupe that he is, believes her every time she promises that next time it will be different. So, he keeps going back for more only to discover that the same thing happens yet again!

I always felt sorry for poor Charlie Brown. He was, after all, a kid; and kids have a hard time learning this sort of thing.

Still, the supposed adults of the west should know better.

The obvious next diplomatic step is to show Iran that the world meant what it said by following through with the toughest achievable sanctions. A myth has developed in some circles that there are "no good options" available to pressure Iran, but that's more excuse than analysis. Iran's mullahs are unpopular at home and their citizens will notice if they are declared a global pariah state. Sanctions on travel by Iran's government officials, diplomats and sports teams may be largely symbolic, but such symbolism will not be missed on the Persian street.

But Lucy is persuasive in her maliciousness; and I have doubts that Charlie Brown will ever grow up or learn from his experiences. We shall see.

UPDATE: VDH has some thoughts on the learning curve: "Relearning Lessons in the War on Terror".
Posted by Dr. Sanity at 8:26 AM