Ned Lamont’s primary victory against Joe Lieberman in Connecticut supposedly represented the triumph of the antiwar, anti-Bush “netroots” within the Democratic party. Alas, our troop presence in Iraq is increasing; it appears Lieberman, running as an independent, will trounce Lamont; and President Bush is having his best week in the polls in six months (which is not quite the same thing as saying he’s doing well in the polls).

So have the Lamonters and other victims of so-called BDS — Bush Derangement Syndrome — been routed? Not quite. Because BDS sufferers have a related secondary affliction: WMDS. This refers not to the unfound weapons of mass destruction but to Wal-Mart Derangement Syndrome. And the Democratic Party is ministering to these patients with reckless abandon.

The New York Times reported recently that the Democrats have, en masse, declared their party to be the enemy of the mega-box store.

Now, if only we could transform and sublimate all the Democrats' intense negative psychic energy into a force for Good... 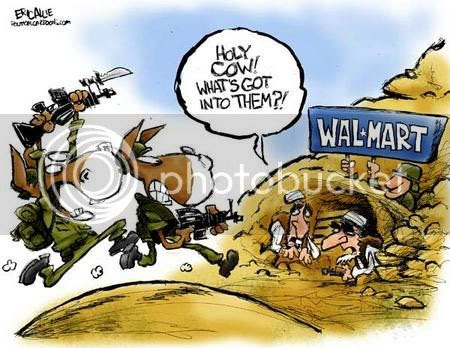 UPDATE: Ace puts his finger on exactly why the Democrats (and the left) are completely irrelevant in today's world.
Posted by Dr. Sanity at 2:49 PM