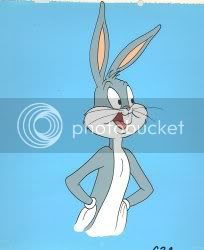 When I read Bill Kristol's editorial on "Bugs Bunny Democrats", the in the Weekly Standard recently, my initial response was that he wasn't being fair to old Bugs by comparing him to the gormless Democrats. So, it was interesting to see several other readers take him to task for this in the next issue:
"I MUST TAKE ISSUE with the characterization of the Euro-Democrats as "Bugs Bunny Democrats" in William Kristol's editorial ("The Bugs Bunny Democrats," Aug. 21 / Aug. 28). Although I realize Kristol's analogy is based on Bugs Bunny's diet, the carrots that the "European wing of the Democratic party" is so fond of offering are all the "EuroDems" have in common with the discerning and determined Bugs.

Bugs Bunny survives by outwitting his opponents. His probing catchphrase, "Eh, what's up, doc?" usually begins his exposition of their follies for all to see. He has demonstrated the willingness to eschew political correctness and directly confront his antagonists' intellectual failings. To Elmer Fudd's clueless, misdirected assertion that "Somethin's scwewy awound here," Bugs is quick to point out that it "could be you, doc."

Granted, Bugs Bunny does show patience with his antagonists, but only up to a point. Once the threat to his security becomes clear, he is willing to take action. He has been known to confront his tormentors with a definitive, "Of course you realize, 'DIS means war!" I doubt that any of the EuroDems have the grit to follow such an example.

Bugs Bunny's bravery is a matter of record. A member of the greatest generation, he took on World War II archvillains such as Herman Goering and even Adolf Hitler himself. In recognition of his fighting spirit, the U.S. Marine Corps awarded Bugs an honorary officer's commission.

Now, "Elmer Fudd Democrats" would certainly be an appropriate description. Perhaps even "Daffy Duck Democrats." But I think we can be sure that there is not a Bugs Bunny among them.

WILLIAM KRISTOL brilliantly analyzes the naive pacifism of contemporary liberalism, which focuses on foreign policy carrots to the exclusion of sticks. But tying the carrot metaphor to Bugs Bunny is unfair. Bugs always frustrated and defeated those trying to destroy him. Just ask Elmer Fudd, Yosemite Sam, Giovanni Jones, Marvin the Martian, and others who experienced Bugs's unique, and hilarious, forms of payback. A little bit Brooklyn, a little bit Bronx (as Mel Blanc, who supplied the voice, once put it), Bugs embodied America's fighting spirit at its best. Our political leaders and foreign policy elites could learn a lot from him.

Both letter writers make excellent points. Bugs has long been a favorite cartoon character (I really like his, "What's up, Doc" line). He is cool and funny under pressure; and he makes his opponents look like complete idiots. You've got to admire that.

As one of the letter writers mentioned, Bugs was something of a war hero during WWII, pushing for War Bonds early in the war; and starring in a number of war-themed cartoons:

Several titles were designed to boost American morale by placing Bugs in wartime themes (such as airplane hijacks by mythical gremlins in "Falling Hare"(1943) and a few others had Bugs take on America's enemies, most notably the infamous "Bugs Bunny Nips the Nips", a now-rarely seen film with Bugs fighting the Japanese on a Pacific island.

It occurs to me that we could use Bugs these days to boost American morale here at home; and of course to mock the current crop of clueless Elmer Fudd's.
Posted by Dr. Sanity at 6:51 AM