THE LIMITATIONS OF CIVILIZATION

MEMRI's latest is a transcript of Hezbollah Secretary-General Hassan Nasrallah with his deep thoughts on why the disarmament of Hezbollah should not be discussed now. The transcript is derived from a speech delivered by Nasrallah that aired on Al-Manar TV yesterday. From PowerLine.

The people of Lebanon celebrate their "victory" with fireworks and praise for Hezbollah, though a closer look at would suggest that this cartoon has the right of it: 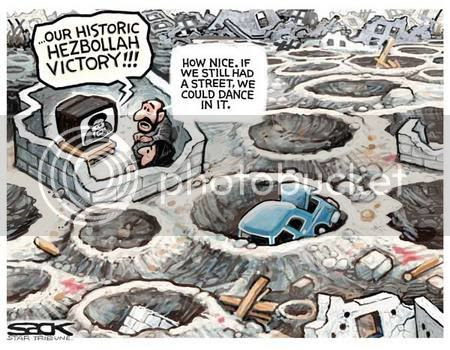 And, Rich Lowery notes that, "like a good neighbor, Hezbollah is there!" At least if you can imagine a "good neighbor" deliberately starting the fire that burned down the house that they then rebuild.

Yet, in the last several days, I have heard interview after interview on TV of Lebanese--including one with the President of Lebanon--who do not see the devastation as Hezbollah's fault for initiating the war, nor as a reason to think that Hezbollah lost. Cause and effect; logic and reason; reality and truth--all would seem to be useless weapons in the battle for "hearts and minds" in this conflict.

If that seems strange, consider this sobering discussion from Wretchard about will and committment (which should be read in its entirety]:

None of the weapons in the IDF arsenal could level this disparity in will. Alexander Solzhenitsyn, in a speech before the Harvard class of 1978 explained how weapons simply became "burdens" to those who lacked a belief worth fighting for. Authentic belief brought commitment; but relativism could only aspire to fashion.
[...]
The matchless power of inherited Cold War weapons was more than overcome by withering of the very mental attitudes which made them effective. Mark Steyn argued that as a result the West's power shrank in direct proportion to the effectiveness of weaponry because the laws of political correctness always diminished the will to use them faster than their increase in destructiveness. "We live in an age of inversely proportional deterrence: The more militarily powerful a civilized nation is, the less its enemies have to fear the full force of that power ever being unleashed. They know America and other Western powers fight under the most stringent self-imposed etiquette. Overwhelming force is one thing; overwhelming force behaving underwhelmingly as a matter of policy is quite another. ... The U.S. military is the best-equipped and best-trained in the world. But it's not enough, it never has been, and it never will be."

Finally, consider that it has been five years since 9/11 and that yesterday, for the first time some truly startling and compelling material has been released from that horrible day (particularly this); which for various reasons (perhaps the term "good breeding" covers it) were never made public.

Personally, I would have thought that the images and voices only now being heard by most Americans should have already been seared into our minds if we expected to take this war seriously. None of them have been staged, faked, or manipulated in any way, after all; and perhaps they would have served as a constant reminder of the sickness we are fighting; and why we have been risking the lives of our troops in the middle east. It has always annoyed me that the Democrats and the left cry "foul" whenever images of 9/11 are used for that purpose. Why should we worry about "hearts and minds" anywhere else in the world, when we so assiduously avoid disturbing our own hearts and minds?

Somehow--to me anyway, all the above seemingly disparate points come together to form a very unpleasant truth about the limitations of civilized behavior.
Posted by Dr. Sanity at 7:09 AM