A WAR TO BE PROUD OF

Victor Davis Hanson: has some thoughts this Memorial Day weekend about the Iraq War:

There may be a lot to regret about the past policy of the United States in the Middle East, but the removal of Saddam Hussein and the effort to birth democracy in his place is surely not one of them. And we should remember that this Memorial Day.

Whatever our righteous anger at Khomeinist Iran, it was wrong, well aside from the arms-for-hostages scandal, to provide even a modicum of aid to Saddam Hussein, the great butcher of his own, during the Iran-Iraq war.

Inviting the fascist Baathist government of Syria into the allied coalition of the first Gulf War meant that we more or less legitimized the Assad regime’s take-over of Lebanon, with disastrous results for its people.

It may have been strategically in error not to have taken out Saddam in 1991, but it was morally wrong to have then encouraged Shiites and Kurds to rise up — while watching idly as Saddam’s reprieved planes and helicopters slaughtered them in the thousands.

A decade of appeasement of Islamic terrorism, with retaliations after the serial attacks — from the first World Trade Center bombing to Khobar Towers and the USS Cole — never exceeding the occasional cruise missile or stern televised lecture, made September 11 inevitable.

A decade was wasted in subsidizing Yasser Arafat on the pretense that he was something other than a mendacious thug.

I cite these few examples of the now nostalgic past, because it is common to see Iraq written off by the architects of these past failures as the “worst” policy decision in our history, a “quagmire” and a “disaster.”

Just the other day at work, people were discussing WWII and the battles their fathers had fought in during that time, when of my colleagues casually commented about what a "waste" Iraq was compared to WWII. On the contrary, I replied. Not only was Iraq for as great--if not greater--a cause as WWII, but it was a key battle in WWIII.

And then the usual began. "But what about all Bush's "lies"? What about all the soldiers dead?" "What about all those Iraqi civilians killed?" As usual, I tried to respond one by one. Most were astonished that Iraq had so few casualties and deaths compared to WWII. Somehow they imagined that Germany and Japan had been stopped without any effort or sacrifice on the part of our soldiers. Some were simply astonished that I would even say such a thing and defend the current administration.

Especially this weekend, though, we should be remembering the achievement our military has had in crushing the Taliban and Saddam Hussein. That we have stayed on to offer a new alternative other than autocracy and theocracy in Afghanistan and Iraq, and kept a targeted United States safe from attack for over four years is an incredible accomplishment.

No matter what the naysayers insist. 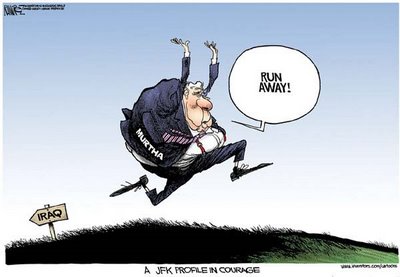