THE MAN HE EVER WAS

I wholeheartedly agree with The Anchoress about President Bush:

That made me wonder a little - has President Bush lost his bearings, or have we? Is it President Bush who has broken faith with “his base” or have they?

When I read my friend’s line, I thought of a line from Pride and Prejudice, in which Elizabeth Bennett says in new appreciation of Mr. Darcy, “In essentials, I believe, he is very much what he ever was.”

Perhaps I am a dim bulb, but President Bush has never surprised me, and that is probably why I have never felt let down or “betrayed” by him. He is, in essentials, precisely whom he has ever been. He did not surprise me when he managed, in August of 2001, to find a morally workable solution in the matter of Embryonic Stem Cells. He did not surprise me when, a month later, he stood on a pile of rubble and lifted a broken city from its knees. When my NYFD friends told me of the enormous consolation and strength he brought to his meetings with grieving families, I was not surprised.

Read it all, please. President Bush is indeed the the man ever was -- a good and decent man; worn down perhaps by the burden of trying to keep this country safe in difficult times; as well as the neverending hostility and histrionics directed his way on a daily basis--but worthy of respect.

And despite his very human flaws, and the many issues on which I disagree with him, he will continue to get that respect from me. 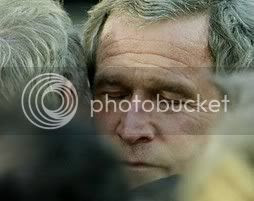