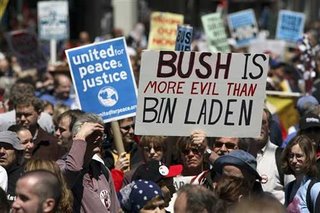 Charles Krauthammer defined Bush Derangement Syndrome: as:
"the acute onset of paranoia in otherwise normal people in reaction to the policies, the presidency -- nay -- the very existence of George W. Bush."

I discuss some of the psychological foundations of Bush hatred in this earlier post, and today want to directly address a parallel process that has developed in the fevered swamps that used to be the fountains of leftist intellectual thought. Specifically, there is a peculiar derangement of thought related to Christianity that seems run in parallel with BDS. As we shall see, this is not a coincidence. In fact, it is a carefully developed delusional system that serves the function of protecting those who believe in it from having to deal with reality.

A definition of Christianophobia or Christianity Derangement Syndrome (CDS), could be formulated thusly:

"The excacerbation of acute and severe paranoia about the imminent imposition of a Christian theocracy in the U.S.; in an individual already suffering from Bush Derangement Syndrome as a reaction to the very existence of (1) the Christian religion; (2) the practitioners of Christianity; and (3) symbols of Christianity anywhere within the culture; while simultaneously completely ignoring and dismissing any threat from the religious fanatics of Islam who repeatedly and clearly have stated that their goal is the imposition of a world-wide Islamic theocracy (or "Caliphate")."

So, as a result of this interesting disorder, here we are in a war with Islamic fundamentalism, and many on the left seem to think that the U.S. is at risk in having a Christian theocracy imposed and that the Bushitler is more dangerous than Bin Laden.

During the 2004 Presidential campaign, one of my friends was so pre-occupied by this issue, she literally could not understand why I would vote for Bush, since it was clear to her that he intended to usher in a religious state.

Since that time, I can't help but have noticed that all the women of my acquaintance are now wearing nun habits; that holy communion is being forced down the throats of unrepentant leftists; and that there has been a dramatic decline in sexually explicit material everywhere as the purveyors of same have been rounded up and summarily executed by the religious police.

Why, last week I (a professed, unrepentant agnostic) was forced to enter a church to obtain sustenance (they were having a bake sale).

You may be asking youself, "What in heaven's name are these people so frightened of?" How do we make sense of symptoms of paranoia so bizarre? So....displaced....from the real threat?

The President has repeatedly reassured people about his personal faith; and quite frankly, his practice of religion is not different in any respect from previous presidents. At a news conference last year, he said:

I think faith is a personal issue. And I take great strength from my faith. But I don't condemn somebody in the political process because they may not agree with me on religion.

But this does not reassure them. Bush is now in the 6th year of his Presidency. When is this supposed theocratic state going to be imposed?

What we have seen is a dramatic rise in Christianophobia. It is my observation that it is not so much the religion per se that people are afraid of; but the simple fact that our country itself was founded on Judeo-Christian values and that those values quite naturally have infused the intellectual life and symbolism of America for over 200 years now.

It seems to me that there is a concerted effort to eliminate these values and the symbols of these values wherever they might be found within the culture (e.g., in government logos and such) in an attempt to replace them with different values and symbols. While the stated objective of the replacement is to be "inclusive" and make the U.S. a "multicultural" society (which it always has been without their help), the upshot is a careful substitution of a particular secular set of values for a value system which has its origins in traditional religion

The hysteria generated by the left on this issue is quite unbelievable--that is, if you don't recognize the simple fact that leftist intellectual thought has itself become a religion--with high priests and holy beliefs that must not under any circumstances be questioned; because non-believers are made apostate and persecuted by the true believers.

Thus, the first explanation of CDS resides in the political fact that the intellectual leaders of the left wish to replace the dominant religion of this country with their own secular religion (not too dissimilar to how the Soviet Union tried to ban traditional religion and impose their own secular version of belief--communism--on the population). Along these lines, they clearly wish to impose, not a theocracy, but a simple autocracry, that will be headed by their belief system (which is unable to tolerate the existence of any other).

There is also an important psychological factor at play. The political wing of the left's ideology has taken this point in history to make its stand because events have come together at the millennium to create an confluence of emotional factors.

At the end of the 20th century, it was apparent that both leftist and rightist totalitarian forces had been soundly beaten by on the battlefield of reality. Sadly, neither was out for the duration, and what we have seen since that time is a alliance between leftist intellectual thought (via postmodern philosophical attempts to compensate for the reality of their intellectual defeat) and the rightist religious fascism of Islam as it is practiced in most of the world.

Islam wherever it exists is trying to impose a theocracy. What the leaders of Hamas, Al Qaeda, Iran and others say explicitly, openly, and repeatedly, doesn't ever seem to register on the intellectual leadership of the left. If you doubt the message, then listen to this video of an interview with three reformed Arab terrorists, which is quite chilling. Read archived accounts of what Imams and religious leaders in Islam are saying about Jews and Christians over at MEMRI. Browse a few of the english-speaking sites for jihad on the internet.

The intellectual leadership of the left consciously know all this, but have allied themselves with this particular theocracy anyway. In their arrogance, they do not feel threatened by Islam, because Islam has shown itself to be compatible with their ideology of totalitarianism and social tyranny. They believe that when they and Islam get rid of their mutual enemies--freedom, capitalism, and individuality--they will be able to handle the the religious details and come out on top.

In the meantime, the psychological displacement and denial that they actively encourage works to their advantage in the general population, who became genuinely and realistically fearful of Islam and its adherents after 9/11.

Displacement is a psychological defense mechanism where there is a separation of emotion from its real object and then redirection of the intense emotion toward something less threatening.

If you answered, "the middle ages"--you are correct.

Why just last year, there was a peaceful transition of power in the only Christian theocracy in the world--the Vatican. Not a single person was killed or tortured as the new Pope was elected and installed.

But, as we all know, there is a religion-- now, today-- that encourages its adherents to kill non-believers. That relegates women to second class citizenship and makes their sexuality a sin punishable by death. There is a religion where homosexuality is not tolerated and individual thought is suppressed.

There is a religion practiced today that rules as a totalitarian theocracy in a number of countries; and its religious leaders regularly give permission to its beleivers to kill Americans, Christians, and Jews. Devoted believers of this religion piloted airplanes into American buildings, killing thousands. They would do it again if they get the chance. Devoted believers in this religion behead people who disagree with them and can be convinced to blow themselves up in order to kill people they don't like.

The left and their political front, the Democrats, would have you believe that because some Christians disapprove of abortion or homosexuality on moral grounds; or that they are vocal in their objection to the state-sanctioned murder of innocents that this is a sign of the impending theocracy. Thus, instead of rational argument and disagreement, the left has chosen to IMPOSE their particular beliefs on each of these topics by passing laws--exactly what they accuse the religious right in this country of trying to do. This psychological technique is called projection; and the political technique of imposing one set of beliefs--religious or not-- on another group by law is known as tyranny. Neither side is correct in trying to impose their particular religion across the nation. But, as the city of San Francisco continually reminds us, local populations may vote to be as ridiculous and amoral as they choose over whatever issues they desire. They simply have to stick within the general guidelines of the Constitution of the U.S. and their particular state.

However comforting it is to believe that Christianity is the religion that poses a threat to freedom and democracy, the real world eventually intrudes on such fantasies. While these clever people "bravely" confront the straw man religion they have set up as the enemy, the real danger slips in unnoticed and without hindrance. Doesn't it strike you as somewhat bizarre that we are exhorted to be "sensitive" to the grossly oppressive beliefs of Islam (e.g. in the case of the rather innocent and childlike Danish cartoons); yet, it is considered avantgard and progressive--and an issue of "freedom of speech" to display pornographic images of Christ or dung-laden images of his mother?

When do you suppose the "secular humanists" and Leftists will organize a conference to discuss the threat that Islam poses to their political freedoms? Don't hold your breath. They actually share the same politics with those who explicitly desire to impose a religious theocracy.

Once again, denial, projection and displacement are at work. They brought us the phenomenon of Bush Derangement Syndrome; and have simultaneously caused a co-occurring disorder: Christianophobia, or Christianity Derangement Syndrome, or antichristianism--call it what you will.

From a psychological perspective, the inherent denial, projection and displacement of antichristianism of the left is no different in theory than the antisemitism that the Jews have had to cope with centuries as the official scapegoats of the world.
Posted by Dr. Sanity at 11:41 AM