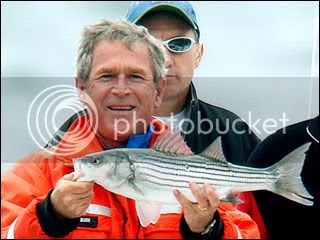 I suspect that someone was telling a big fish story to the press the other day. And of course all the usual suspects fell for it--hook, line, and sinker!

(Important Disclosure: Picture does not necessarily represent either a "bass" or a "perch"--unless it does!)

Now there is an insane discussion on the left about whether he said "bass" or "perch" and whether the White House is "covering up his mistake."

Perhaps now you begin to understand how easy it is to develop conspiracy theories when you are paranoid to begin with? Paranoia strikes deep.

The usual paranoid and angry ranting on their part can be found here. Some examples:

-"what a complete idiot."

Catching a fish (of questionable weight) is the high point of this man's presidency?.....

Guess the fish was in the same bubble he occupies."

-"I say IMPEACH THE LYING SACK OF SHIT!

I know that Democrats everywhere are appalled at the suggestion of impeaching a criminally insane and lethally imcompetent fool. I guess they continue to strategize in their special way that has brought our nation into international disrepute and enabled the Bush Regime to continue on the path to hell...."

Those comments are just three out of 185 or so along the same vein. There is one fairly sensible quote to the effect that maybe this is all about a translation error since the original article was in German. It is ignored by most of the commenters, who prefer to spew instead.

Personally I think Bush caught a Moonfish (otherwise known as a "Red Wag", or Xiphophorus maculatus) .
Posted by Dr. Sanity at 9:50 AM