THE FOUR PILLARS OF THE SOCIALIST REVIVAL, AND THE RISE OF ISLAMOFASCISM

Here is a fascinating talk by Bernard Lewis in which he discusses a variety of issues with regard to Islam (hat tip: OBloodyHell). Of particular interest is Lewis' analysis of the Danish Cartoon story:

That is the question of the Danish cartoons. Now, this is a very curious story. The news story, as it broke, was that a Danish newspaper had published a series of cartoons offensive to the Prophet, and that this had led to spontaneous outbursts of indignation all over the Muslim world. Now, there are several problems in this. One of them was that the spontaneous outbursts of indignation didn't occur until slightly more than four months after the publication of the cartoons. It's a little difficult to follow, I think you'll agree. The second problem was that when the spontaneous outbreaks of indignation did occur all over the Muslim world, in the remotest parts of northern Nigeria, Central Asia, Southeast Asia and elsewhere they had an ample supply of Danish flags of suitable size and texture for trampling or burning, as required. Obviously, this was something carefully prepared over a period of time.

What exactly was it about? Well, fortunately we have a little background on this, which makes it easier to understand. About 18 years ago, you may recall, the Ayatollah Khomeini pronounced a sentence of death against the novelist Salman Rushdie, who was living in London at that time. The crime for which he sentenced him to death was insulting the Prophet. For a Muslim to insult the Prophet is tantamount to apostasy, and that, as we were recently reminded in Afghanistan, is widely seen as a capital offense.

But this is a different matter. And after a time, I got interested in what was happening, and therefore made a study of the literature relating to this offense, which probably I would not otherwise have bothered with. A number of interesting things emerged. By the way, when we talk of Muslim law, I would remind you that we are talking about law. Sharia is a system of law and adjudication, not of lynching and terror. It is a law that lays down rules, rules for evidence, for indictment, for defense and the rest of it, quite a different matter from what has been happening recently.

The first point made was that it is forbidden to portray the Prophet, that making images of the Prophet of any kind is against the Muslim religion. That is true, though not always strictly observed by Muslims. But the point is that they want to avoid any kind of deification of the Prophet. Muslims are shocked when they go into churches and they see pictures and statues being worshipped. This they see as idolatrous. And if you go into the interior of a mosque, it is very austere: no pictures, no statues, only inscriptions. The ban on the portrayal of a prophet is intended to prevent the development of idolatrous worship of the Prophet. I don't think there was any danger of that from the Danish cartoons.

What was much more at issue was another ban, and that is on insulting the Prophet, which is, of course, an offense. This raises a number of interesting questions that I think are of direct relevance to the whole issue at the present time. Insulting the Prophet is an offense in Muslim law. This raises two issues: one of substantive law, the other of jurisdiction. Muslim jurists discuss this at some length, and there is a considerable body of case law concerning it in Muslim states.

The majority Sunni view is that Muslim law only applies in countries under Muslim government. What happens outside is no concern of the Muslim authorities. One distinguished jurist makes his point with an extreme example: A Muslim traveling in the lands of the unbelievers commits robbery and murder. He returns to the lands of Islam with his loot. No action can be taken against him or against his loot because the offense was committed outside the jurisdiction of Islam, and it is therefore up to the juridical and legal authorities of the infidels to take action, if they can and will.

Here you have two different opinions relating to an offense committed by a Muslim. That is not the case for the Danish cartoons. This is an offense committed by a non-Muslim. And here the plot thickens. This is discussed by all of the juridical authorities only in the case of a non-Muslim subject of a Muslim state. If a non-Muslim subject of a Muslim state says or does something offensive to the Prophet, he is to be tried — accused, tried, and if necessary, punished. The jurists on the whole tend to take a rather mild view of this offense. They say, well, he is not a Muslim; he doesn't accept Mohammed as the Prophet; we know that. So saying that Mohammed is no prophet does not constitute this offense. It has to be more specifically insulting than that. And, as I say, there is an elaborate juridical literature and case law on this subject.

What is never discussed at all — it is never considered — is an offense committed by a non-Muslim in a non-Muslim country. That, according to the unanimous opinion of all of the doctors of the holy law is no concern of Islamic law, which brings us back to the case of Denmark. Does this mean that Denmark, along with the rest of Europe is now considered part of the Islamic lands, and that the Danes, like the rest, are therefore dhimmis, non-Muslim subjects of the Muslim state? I think this is an interesting question, which can lead to several possible lines of inquiry.
[...]
Insulting the Prophet is something that has been going on in Europe for a very long time. In Dante's Inferno, if you're interested in the 28th Canto, where Dante is being taken on his conducted tour of hell and guided by Virgil, he comes across the Prophet Mohammed in the course of his eternal damnation. He is punished — I quote Dante's words, as a "seminator di scandalo e di scisma," a sower of scandal and of schism. Now, this is very insulting. In the great Cathedral of Bologna there is a wonderful set of pictures painted, if I remember rightly, in the 15th century depicting scenes from Dante's Inferno, including some very graphic pictures of Mohammed being tortured in hell by the devil — very graphic.

Nobody did anything about this. A couple of years ago, the leaders of the Italian-Muslim community sent a polite request to the cathedral saying these are insulting to Muslims; would they mind covering those pictures. The cathedral administration said they would consider it. Nothing happened. The pictures are still in view. 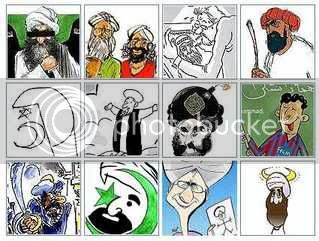 The entire talk is long, but definitely worth reading.

What I take away from this excellent discussion by Lewis is that the entire Danish Cartoon episode was a carefully orchestrated propaganda ploy by our enemies as part of the war on terror.

I keep getting reminded when I read articles like the one above, that we are dealing with an extremely subtle, but capable and sophisticated enemy; who is able to plot, manipulate, and develop a coherent and effective strategy to split and disarm the West. Our enemies know us very, very well--in fact, they appear to perfectly understand the excessively vulnerabile position of the West because of its acceptance and promulgation of multiculturalism and political correctness; and have analyzed how to use the contents of these belief systems against us while furthering their own religious objectives.

Observe how easily Islam has been able to subvert key Western values--such as freedom of speech and expression--with a degree of invincibility and outraged virtue, capitalizing on a tactical opportunity that they have never before had in history. And worse of all, many on the political left--particularly the remnants of utopian socialism-- are aiding and abetting the Islamofascists.

With that in mind, is it at all surprising that Islam is able to take maximum advantage of this Achilles heel within Western culture and use the vulnerability to optimize their own religious, political, psychological, and military objectives?

Multiculturalism and political correctness are two of the fundamental pseudo-intellectual, quasi-religious tenets-- along with a third: radical environmentalism--that have been widely disseminated by intellectuals unable to abandon socialism even after its crushing failures in the 20th century. These tenets have been slowly, but relentlessly absorbed at all levels of Western culture in the last decade or so--but primarily since the end of the Cold War.

All three have been incorporated into most K-12 curricula and all other learning environments. They have been at the forefront of attempts by leading academics and academic institutions to rewrite most of history and undo thousands of years of Western cultural advancement. And further, as the culture has been completely saturated with this toxic brew, any attempt to question the tenets' validity or to contest their value is met with hysterical accusations of racism, sexism, homophobia, Islamophobia, imperialism, bigotry, or--worse of all --intolerance or insensitivity.

It just so happens, that these tenets represent three of the four pillars that are the foundation of an evolving epistemological, ethical and political strategy that the socialist remnants in the world have developed and are using to prevent their ideology from entering the dustbin of history.

And, what is most interesting is that, even as they encourage and enable Islam with the first three pillars; the Islamofascists are aiding and abetting them by using the fourth pillar- Terrorism. We can think of the four pillars as the reason for both the socialist revival (particularly in the western hemisphere recently) and the rapid advancement of the Islamic Jihad.

Below is a flow chart that I adapted from Stephen Hick's book, Explaining Postmodernism (p. 173), which summarizes the evolution of these strategies:

UPDATE: Just in case you think that an alliance between socialists/communists and Islamofascists is only theoretical, you might want to check this out. (hat tip: Stefania) Can Hugo and Evo be far behind? I especially liked this perversion of language:

According to a report released by the Foreign Ministry's Public Relations Department, at the meeting Mottaki referred to Iran-Cuba friendly relations as an example of solidarity between the two justice-seeking and freedom-seeking nations.