Life Under the Mullahs

American Daughter has many important posts about what is going on in Iran. People are risking their lives to get these photos and videos out, which document the barbarity of the theocratic regime of the Mullahs.

As usual, the mainstream media is ignoring the situation there, but American Daughter offers a disturbing view of the regime which makes the case for regime change on its own merits.

Many analysts are considering issues such as nuclear proliferation, global terrorism, stability in the Middle East, and other aspects of United States foreign policy. American Daughter's rationale for opposing the incumbent theocracy is much more elemental.

People of good will everywhere are increasingly building a civilized world of freedom, hope, education, and opportunity. The murderous fanatics ruling Iran have no place in that world.

What got to me were the videos documenting an execution by stoning to death of a military officer who was sentenced to death for attending a meeting at which the rule of the mullahs was criticized. The video record was smuggled out of Iran.

The person was first brutally beaten until he could no longer stand. Then he was wrapped in a white cloth (below)... 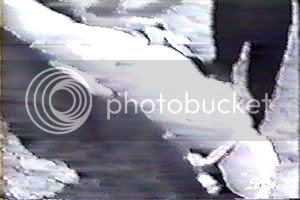 ...and his body placed in a hole with only his torso showing. He is then stoned to death. 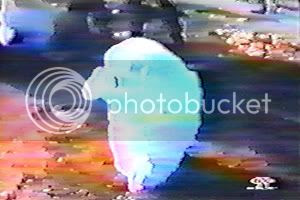 These are just the stills. The videos are even more revolting. I commend American Daaughter for posting them and urge everyone to watch and see what goes on in one of these Islamic utopias. Then ask yourself why the U.S. is called to international account by these murderous cretins for mishandling or disrespecting a book.

Don't you feel there is just a little bit of irony and asymmetry here?
Posted by Dr. Sanity at 9:26 PM