From Karma Nabulsim, fellow in politics and international relations at Oxford University, writing in the Guradian:

The drivers of violence in Gaza are clearly external. When all Palestinians can vote for sovereign rule, peace will be within reach.

There is nothing uglier and more brutal to the human spirit, nothing more lethal to that universal hope for freedom, than to see a people struggling for liberty for such a long time begin to kill each other. How and why did we get here? Above all: how do we get out of here? These are the questions everyone watching events unfold in Gaza and the West Bank are asking themselves. But before answering them, it is essential to understand just what we are witnessing.

This is not at its heart a civil war, nor is it an example of the upsurge of regional Islamism. It is not reducible to an atavistic clan or fratricidal blood-letting, nor to a power struggle between warring factions. This violence cannot be characterised as a battle between secular moderates who seek a negotiated settlement and religious terrorist groups. And this is not, above all, a miserable situation that has simply slipped unnoticed into disaster.

The many complex steps that led us here today were largely the outcome of the deliberate policies of a belligerent occupying power backed by the US.

One can only stand in wonder and awe at the incredible amount of self-delusion necessary to be able to make such a series of statements. Who could possibly believe such nonsense?

I forgot there is an entire contingent of useful idiots marching and chanting the slogans of the political left, who are not only ready and willing to believe it; they desperately hope it is actually true.

But you have to be in complete denial, with your head safely tucked where the sun don't shine, if you harbor any doubts that the events we are witnessing in the Middle East are not moves in the global war that Islam has launched against the civilized world. We can close our eyes and pretend that it isn't happening at all; Or that everything is America's or Israel's fault; we can insist that Iraq exists in an alternate universe and is somehow not a battle of this war; but no matter how much denial is engaged in, the reality will still be there.

Wretchard comments on the recent crackdown in Iran and the UN's statement that the genocide in Darfur is about global warming by noting:

...there is a strange tendency, especially among those who would otherwise claim that America is everywhere declining, to ascribe to it an indirect omnipotence. Everything is America's fault. Is the climate changing? Are people in Gaza starving? Is there no help for those being killed in Darfur? Are the Ayatollahs beating up on student demonstrators? Look no further for the cause. It's all America's fault. It's always America's fault.

An unbreakable chain of causality is constructed from Washington politics to the smallest butterfly fluttering in the Amazon. It is the reverse Butterfly Effect; and the logical consequence is that if America does nothing -- if preferably it stops breathing -- then all the evils of the world will return to the lockbox whence they came. John Howard, speaking in Washington, likened this attitude to that of a frightened child. "And it's a war that confronts us all. Those who imagine that somehow or other you can escape it by rolling yourself into a little ball and going over in the corner and hoping that you're not going to be noticed are doomed to be very, very uncomfortably disappointed."

I wonder when we will cease this bizarre tendency to infantalize the enemy in this global war, and recognize that we are dealing with adults whose own set of perverted values--diametrically opposed to ours--have brought them to the place they are in? When will we stop pretending that they do not have free will and are only the poor, helpless victims of American, or Israeli, or Western evil? When will we begin to believe that they actually mean what they have said repeatedly about forcing us to submit to their will or destroying us? When, in short, will we finally admit once and for all that they are fully capable of detailed thought, planning and action--particularly brutal and barbaric action by any civilized standard--to achieve their oft-repeated goals?

Two chess quotes come to mind. The first is from Bobby Fischer: "Chess is life"; and the second is from Max Euwe:

"Do not ever underestimate your opponent, particularly when he is much weaker than you are. You are setting yourself up for a fall if you do this."

We are surely setting ourselves up for a fall in this Game.

Let us consider the positioning of the pieces on the Middle East chessboard and the most recent moves in the Game.

Hamas, committed only to violence and death and Islam, is a piece controlled by the Iran/Syria axis. It has made its move on the board and now controls Gaza...America, Israel and the West have countered with this maneuver. Meanwhile, "militants" in Lebanon are firing rockets at Israel.

And we might do well to remember that the the word "checkmate" orginates from the Farsi language spoken in Iran and Afghanistan. The original phrase is SHAH-K-MATE which means "The King is Dead".

We are playing against an opponent who is clever, deceitful, and in deadly earnest. It is not we who are controlling that opponent's moves on the board except insofar as he must respond to our moves just as we should be responding to his. All to often we have not countered his aggressive moves simply because there is a large number of people [supposedly] on our side who don't seem to understand that we are playing a very real "game" for very high stakes.

I will end with another chess quote from a grand master, Savielly Tartakower: "No game was ever won by resigning." 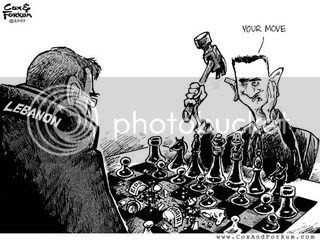