THE SANITY SQUAD: The Palestinian Primaries and Suicide Bumbers 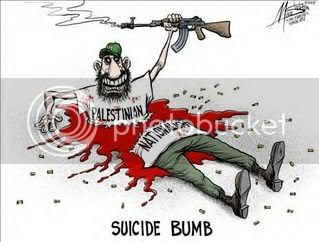 And we think we've got a contentious primary season! Check out how election primaries are done, Palestinian style in the most recent Sanity Squad Podcast at Pajamas Media !

You may have noticed that it has finally happened: there’s a two-state solution in Palestine. The only problem is that the two states are both Palestinian, run by terrorist Hamas in Gaza and corrupt Fatah in the West Bank. Actually, that’s not the only problem; both groups are violent, welfare-dependent, and dedicated to the destruction of Israel. Find out who’s to blame and what the future holds in this week’s podcast.

Join Shrinkwrapped, Siggy , Neo-neocon and me as we discuss the recent bloody Palestinian election protocols; and dysfunctional Palestinian society in general. The support of this broken and twisted society is a form of psychological denial, projection, and displacement for all the malfuntioning medieval regimes who must deflect attention from their own failures and externalize the blame on Jews and Americans.

And where there is failure, you will always find today's political left cheering it on; vociferously enabling it, and supporting it as if their ideology depended on it. Which, of course, it does.

The Sanity Squad cartoon is drawn by Eric Allie, whose collection of political cartoons can be found here and here).
Posted by Dr. Sanity at 9:57 AM