RUSHDIE RAGE AND THE RELIGION OF PERPETUAL WHINING & OUTRAGE

In Pakistan, dutiful followers of the jihadi guide have found a new pretext this week for an anti-Western bonfire party: the knighting of author Salman Rushdie in Britain. Muslim groups are burning Queen Elizabeth and Rushdie in effigy. The Union Jack is in flames. The Religion of Perpetual Outrage strikes again.

It's not just some obscure spokesman for a "tiny minority" objecting to Rushdie's knighthood and leading the renewed calls for Rushdie's death and Britain's submission. Pakistan's religious affairs minister, Mohammed ljaz ul-Haq, bellowed: "If someone blows himself up he will consider himself justified. How can we fight terrorism when those who commit blasphemy are rewarded by the West?" He says he was misunderstood, but the message is as loud and clear as the inscriptions on the infamous placards British Muslims waved around during last year's conflagration over the Danish cartoons:

After the Danish Cartoon drama; after the flushing the Koran fiasco; after the latest Rushdie rage hysteria, it should be obvious to anyone with a brain (which sadly, excludes most of the robots on the left these days) that multiculturalism and the politically correct mindset has been repeatedly exposed as a complete fraud. With each increasingly bizarre and histrionic reaction from the religion of perpetual outrage, the shocking consequences and deadly potential of that fraud are suddenly becoming all too clear.

Wretchard commented back during the Danish Cartoons scandal:

The fine, broad highway to Hell that is political correctness which has achieved the opposite of its intent: not the universal chorus of harmony but religious conflict at its most primitive level.

One wonders how anyone could have expectd a different result?

Having given up any objective standard by which to mediate such vastly different perspectives and feelings; having abandoned reason altogether in favor of expressing one's feelings no matter what the cost; and, finally, having endlessly touted the critical importance and essential need to "belong" to one's race, tribe, religion or group first and foremost; the outcome is what Stephen Hicks refers to as "group balkinization" --with all its inevitable and inescapable conflict.

Why, in other words, would peaceful coexistence result from a movement that has done everything in its power to eradicate universalism and foist multiculturalism into the public consciousness?

Multiculturalism, or that which celebrates--not belonging to the family of humanity-- but one's sexual, racial, ethnic, or religious identity above all else.

Like many ideas of the left, it should now be apparent to anyone with a brain, that the exact opposite of what is promised ends up being delivered.

Just as the false promises of socialism and communism were found to lead to misery instead of happiness; poverty instead of wealth; enslavement instead of freedom--so too, have multiculturalism and political correctness, instead of harmony, brought lethal discord.

Malkin goes on to note:

As anyone with their eyes open through Rushdie's ordeal, the deadly Mohammed cartoons riots, the calls for beheading the Pope, Oriana Fallaci, Ayaan Hirsi Ali and defiant, ex-Muslim apostates around the world knows: "Sensitivity" in the jihadi world is a one-way, dead-end street.

And yet, the left , who perpetually have their eyes tightly shut to reality, will issue calls for appeasement and "understanding". They will minimize this latest obscenity, which is an attack on all Western values, freedoms, and culture. They will trip all over themselves bowing and scraping before these Islaminal bullies.

And, that kind of "compromise" and "multicultural tolerance" is what has brought us to this unbelievable situation in the first place.

The very first time we allowed the adherents of a medieval and primitive religion to believe that their feelings about that religion trump all the values of western civiliztion; the minute we began to apologize for our successes and make excuses--or even blame ourselves--for their failures; we were bound to come to this place.

Reason cannot be appealed to; nor tolerance--for the Islamists believe in neither. So here we are, together, on the PC highway to hell.

It may be late in the journey, but it is time for us to get off this path while we still can--if we still can.

I personally have no objection to Islam reaching their final destination alone. 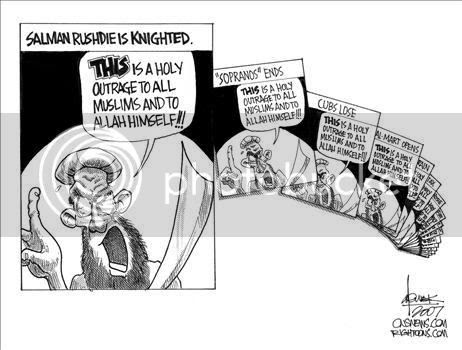 Holy Outrage, Baathman! It's the Religion of Perpetual Whining!
Posted by Dr. Sanity at 8:23 AM