THE WORLD IS AWAKENING FROM A LONG SLEEP***Updated***

...where they dreamed of a peaceful Palestinian state living side-by-side with Israel. Only now are they beginning to realize it ain't gonna happen and that for the last fifty years they have been living in a nightmare.

The nightmare is the legacy of YasserArafat; and it is finally playing itself out in Gaza, and soon it will play itself out in the entire Arab world itself.

The chief Palestinian Authority negotiator had this to say about the violence and bloodshed going on right now:

"If we can't help ourselves, nobody can," said Erekat. "Who will come to help us?" It would be like expecting snow in Jericho in August, he said, a reference to the desert West Bank town where he lives.

The New York-based Human Rights Watch accused both Hamas and Fatah on Wednesday of committing "serious violations of international humanitarian law" and even "war crimes" by summarily executing captives, killing those not involved in the hostilities and engaging in battles near Palestinian hospitals.

This same Muslim versus Muslim violence is playing itself out in Iraq with the sectarian hate and the unrestrained barbarism that Muslims seem to reserve especially for each other, even when there are infidels around to also kill.

Something has happened to all that carefully cultivated Islamic victimhood. Let's consider what it might be, shall we?

First, for any understanding of events in the Middle East, it is necessary to put it into the context of the presumably pathetic plight of the poor Palestinians; so, we will begin there.

Western policy toward the never-ending Israeli-Palestinian conflict has been amazingly consistent over the last half century. It asks only three things of the Palestinians:

Siggy has astutely highlighted the problem inherent in these three "excessive" demands:

What exactly is one sided and unfair? What possible reason could the Palestinians have for not going along with the plan? In doing so, the floodgates of foreign aid, investment and all kinds of benefits would open.

What possible motives- or pathologies, could the Palestinians have for remaining ‘on the dole’ and in the gutter? What demands are so onerous that they justify Palestinian inertia and failure?

Consider this: When the Israelis look for solutions to problems, they turn to other western democracies. When the Palestinians look for solutions to problems, they turn to the Arab world for advice and counsel. They gravitate to the most dysfunctional group of leaders in the world, despots, dictators and tyrants that distinguished themselves on the world stage by the magnitude of their failures. From Qaddafi to the Saudis, the Palestinians are only too happy to take advice from the smorgasbord of some of the most dysfunctional leaders in history.

Not only do they consistently get bad advice from their Muslim "brothers", but search around inside your mind for a moment for an image that could symbolize Palestinian society as it has evolved since the mid-20th century. The one to the right is what pops into my mind.

The suicide bomber who indiscriminantly kills innocents in the name of their sad little god is the only "contribution" the Palestinians as a culture have made to human civilization--and it is a disturbingly negative one. "Civilized" is not a word a modern human would generally even associate with either the Palestinians as evidenced by their current behavior.

The image of children being brainwashed into becoming martyrs captures the essence of the depravity of Palestinian society, an artificial society that was consciously created by the Arab world and its Islamic states and which has unconsciously evolved into a repository for the most severe manifestations of Arab/Islamic psychopathology.

The former scenario allows them to maintain and nourish the myth of Palestinian victimhood--and by extension Arab/Islamic victimhood--by externalizing the blame for their own failures and dyfunctions as a culture, as a religion, and as nations.

The Palestinians themselves have become symbolic of the entire Arab/Islamic world. The world is living vicariously through the Palestinians, and the destructive conflict that they nurture is simply a microcosm in which their own religious and cultural inadequacies are acted out.

The Palestinians actually have been given multiple chances to leave the dysfunctional family of which they are members and join the civilized world. Israel has offered them this opportunity multiple times and most recently the Palestinian people have been given a chance at creating their own state. The world is watching as they choose instead to have a civil war that will ensure the terrorist group Hamas will be in absolute control. To preserve the victimhood status of the Palestinians the latest strategy developed by the "religion of peace" is to prevent anyone from leaving the scene of the crime. Of course, the really smart ones should have left long ago.

If the Palestinians had done even the bare minimum (the three requirements listed above)--hell, if they had only chosen to recognize Israel and stop the mindless promulgation of hate--the floodgates of foreign investment and economic prosperity would be opened to them.

Their Muslim "brothers" understand that they must not let that happen under any circumstances and have worked diligently to make sure it doesn't. Because if the Palestinians actually bought into the dreams of nationhood and lived and worked side-by-side with the incredibly successful Jewish state, then the entire world would not be able to ignore the gross pathology of the rest of the Middle East, which, inspite of its oil wealth still lives in the middle ages.

But then, some of the brothers went a little too far on 9/11; and along came that damn cowboy Bush who changed the rules and clogged up the well-oiled machine of Arab/Islamic victimhood. The strategic interventions in Afghanistan and in Iraq--for all the weeping and wailing and gnashing of teeth by the international community; and for all the military and political ineptness that transpired--was the beginning of the end of a decades-long con game. Both the petty little despots as well as the malignant tyrants of the region are exposed for what they really are.

With no one to blame but themselves, the beasts in the Middle East have turned on one another. The civilized world must no longer make the mistake of treating them as moral and civilized equals, and must demand civilized behavior from them before another dime of blood money is sent their way.

I concur with Siggy, who says that "...this civil war s necessary" because

If Hamas wins the civil war, their ideologies and beliefs will no longer be camouflaged. we will know how to deal with these same ideologues that supported Saddam Hussein. If the PA wins the civil war, they will have to make some serious choices, or the cycle of internal violence will repeat itself. The only thing that is certain is that neither the western democracies or Israel will allow for another 40 years of Arafat type obfuscation, double talk and hypocrisy from the Palestinians.

If the Western world is finally waking up to reality and will no longer reward the dysfunction and enable the reasonable people can begin to hope that con game has been broken up for good and that it eventually will be the stimulus needed to shake the Middle East out of the delusional stupor that has kept them locked in dysfunction and backwardness for so long.

The rest of the Middle East stands at a crossroads: they can either take the path toward civilization and progress; or they can choose to follow the path of terror, tyranny and oppression. Either way, it will be crystal clear that the choice is theirs and theirs alone; and they won't be able to blame Israel or the West anymore or pretend they are the victims of anything except their own suicidal choices.

ISRAEL'S disengagement from Gaza, completed 22 months ago, has succeeded.

It was a demonstration project of a sort - an experiment in Palestinian self-rule. If the management of Gaza had gone well, there would have been a Palestinian state within three years, tops.

OK, now speak these three words to yourself: a Palestinian state.

Finished? Good. So are the words. They won't be coming out of anybody's mouth again for a very, very long time - at least not in any meaningful way.

Someone asked Benjamin Franklin what America got out of the Constitutional Convention of 1787. His reply: "A republic - if you can keep it."

So it was with Gaza in August 2005. The Palestinians got a "homeland, if you can keep it."

What they got instead was hell on earth.

What they got was two brutally murderous gangs, Fatah and Hamas, competing for power by throwing people off the roofs of buildings and slaughtering rivals in front of their wives and children.

What they got was Tony Soprano (Fatah) vs. Phil Leotardo (Hamas). Only this time, Tony got his head smashed in by the SUV.

Some say all this represents a failure on the part of Bush's Mideast policies. On the contrary. It is precisely those policies that have made evident to the entire world what should have been obvious for some time: we are not dealing with civilized people; we are dealing with fanatics who only pretend to be civilized.

Now that they are unmasked and the con game has been disrupted, the reality has forced them to behave according to their natures. President Bush's vision is still worthwhile--but before freedom and democracy can take root, the garbage has to be swept out, along with the rats feeding on it. The rats and their garbage can no longer pretend to be poor helpless victims of Israeli aggression and play to the idiots in the West. Their real agenda is perfectly clear. 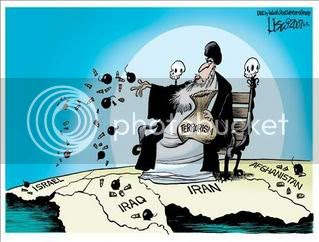