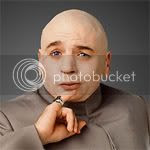 For all those "evil" scientists everywhere, who have callously oppressed and victimized poor, helpless streptococci, in their quest for species dominance, the most recent Sanity Squad Podcast at Pajamas Media explores the failure of environmentalists to consider homo sapiens as an integral part of nature's complex system. Looked at from the perspective of the natural order, and especially through the Darwinian lens, that means that humans have as much right as any species to demonstrate their fitness for survival. Instead of their activities being considered a 'blight" on an external natural order, they--and the products of their minds (i.e., science, technology, art and literature)--are an essential part of the ecosystem!

We like to think that Science is objective—-but is it? Certainly not when the popular press, the schools, and scientists with an agenda get through with it with making it conform to their particular ideology.

This week’s podcast explores the wonders of scientific research and its discontents; including the unforeseen consequences of Rachel Carson’s vendetta against DDT (which is directly responsible for the deaths of millions of children under age 5--about 800,000 or more per year; the vagaries of estimating AIDS cases in Africa; the vaccination vigilantes, and other victims and victimizers.

For the benefit of all intelligent and discerning listeners; as well as for the annoyance of the the reality-challenged community, the Sanity Squad brings clarity and psychological insight to all the postmodern, quasi-scientific rhetoric.

Join Neo-neocon, Shrinkwrapped, Siggy and I as we make sense of all the nonsense and bring some brief sanity to the insane rhetoric of today Luddites who use junk science to advance their anti-human causes.

The Sanity Squad cartoon is drawn by Eric Allie, whose collection of political cartoons can be found here and here).
Posted by Dr. Sanity at 6:22 AM