THE "GET OUT OF JAIL FREE" MENTALITY

So, Palestinian reporters are angry at Palestinian terrorists (referred to as "Gaza militants" by Reuters:)

The Palestinian journalists' union criticised militants on Sunday for using a vehicle marked with a "TV" sign to approach Gaza's border with Israel and attack an Israeli military position across the frontier.

One militant was killed in Saturday's attack, jointly claimed by Islamic Jihad and al-Aqsa Martyrs Brigades, an armed wing of President Mahmoud Abbas Fatah faction. The Israeli military said none of its soldiers was hurt.

"The use of vehicles that carry 'Press', 'TV' or other signs ... expose journalists' lives to danger, gives the Israeli occupation a pretext to target and kill journalists and restricts their ability to perform their professional and national duties," the Palestinian Journalist Syndicate said.

They are joking, right?

What do they imagine the motivations of the "militants" are to do this sort of thing in the first place?

Glenn Reynolds figures it out:


THEY'VE ALREADY USED AMBULANCES, a car labelled "TV" to stage an attack? It's all upside for them-- no significant outrage now, and maybe it'll lead the Israelis to accidentally shoot up a truck full of real reporters, which will then cause worldwide condemnation. Of the Israelis.

Then he quotes from TigerHawk:

And when it happens that condemnation will be outrageous precisely because it is so predictable. Palestinian strategists understand the objective, which is to put the Israeli military in an impossible situation. Everybody else also understands the objective, and -- this is the big point -- everybody understands that the Palestinian strategists understand. It is one giant cesspool of known-knowns, so those who condemn Israel when it happens will be, yes, collaborators.

I share his lack of sympathy for the reporters' moralizing. They seem shocked, shocked that such things go on.

But let's, for a moment, consider the Palestinian strategists themselves, who deliberately and calculatingly chose that particular method; and what they are psychologically counting on to be the world's response to their behavior.

As TigerHawk notes, that response is utterly predictable. The terrorist's behavior will be ignored or dismissed; and Israel, a country that actually exceeds the requirements of civilized behavior and works hard to minimize civilian casualties, will be excoriated and blacklisted by the same people.

Just back in April, for example, the UK reporters union voted to boycott Israel; and do you suppose this latest act by the terrorists of Gaza will make those reporters change their mind? Or, will this egregious appropriation of the news in Canada give anyone more than a moment's pause in their haste to condemn Israel? 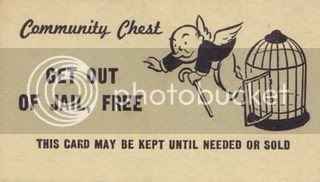 I don't expect that it will. No one seemed to care much when the terorists used ambulances; no one cared when the terrorists used human shields or placed their missiles with which they attacked Israel next to apartment complexes; no one cares what the terrorists do or how malevolent their intentions are. As Reynolds and TigerHawk so accurately suggest, the Palestinians know that the international community has given them carte blance; a "Get Out of Jail Free" card which has a dual purpose: it lets the Palestinians off the hook for their behavior; and on the flip side is an "Opt Out of Reality Free" option for the benefit of the international community.

This is the same kind of card that Paris Hilton expected would literally be her ticket out of the slammer. Why? Well, Paris had every reason to expect it because her parents have always bailed her out and she has never had to reap the consequences of her own narcissistic behavior. In the Palestinian's case, the international community (particularly the left) is inclined to do the same as Mr. and Mrs. Hilton.

The Palestinian strategists, in particular, depend entirely on the phenomenon of denial of reality by the West; a psychological state carefully cultivated and promoted by the multicultural racism/infantalization promulgated by the intellectual elites of the political left.

In saying the above, I am possibly giving some of those elites too much credit for being conscious; many are so brainwashed by socialist ideology they are only capable of a reflexive and automatic response when those who perpetrate evil happen to be a member of an identified victim class.

So, why is so easy for so many Westerners to succumb to this sort of rmanipulation by the Palestinian strategists?

What we are witnessing is a regressive psycholgoical defensive maneuver that has become perhaps, the most common response to the worldwide threat of Islamofascism, with all its attendant barbarism and frightening committment to death and destruction. A very specific kind of psychological denial has become the "opt out of reality" ticket for the West and it is referred to as displacement (also see here, here and here).

I have discussed this phenomenon multiple times because displacement is the same psychological strategy that is at the root of Bush Derangement Syndrome and the widespread leftist belief that Christianity is iminently going to impose a theocratic state in the US, even as Shar'ia is welcomed with open arms, tolerant hearts, and closed eyes.

And it is also happens to be the dynamic behind the current rise of anti-semitism and anti-American sentiment right here in the USA--even among relatively normal individuals otherwise.

You can think of psychological displacement as a process analogous to how attenuated viruses work when a person is immunized with them to prevent the catastrophic consequences of an otherwise life-threatening virus.

Psychotherapy itself revolves around, and works because of the temporary displacement of the patient's psychopathology onto the therapist--which is called transference. Let's say, that the patient has a conflict with his father. For all intents and purposes, the therapist becomes the psychological brother and the therapeutic relationship plays out the drama in a less threatening, and more manageable setting.

The entire purpose of displacement is to gain control over the conflict. By focusing on something you have some control over, the psyche is much less threatened. You can fire your therapist; you can express your hatred unreservedly and there will not be the consequences if that hatred were directed toward the real object of conflict. You can even pretend, that if it weren't for the therapist, everything in your life would be perfect.

Displacement can be thought of as an slightly more mature type of projection. In projection, the individual remains oblivious to the fact that he owns and is responsible for the emotions that he imagines are in the person or group into which he is projecting. In other words, ownership of the idea and/or affect is banished from the self.

In displacement, the idea or emotion is deflected from one object to another, less threatening one, but the ownership of the negative emotion or idea (e.g. animosity, anger) is retained--and is often raised to a virtue. A common example is the person who is angry at a loved one, but settles for kicking the dog. The anger is evident in the action and is still owned by the person experiencing it.

At its most primitive, anti-semitism is a form of psychological projection (just as all racism is). We see this infantile defense used repeatedly in the Arab/Islamic world. They seem unable to appreciate the irony of their labelling of Islam as a "religion of peace", for example, and dismiss the barbarism done in the name of Islam as misunderstandings or the actions of only a few. In other words, they dismiss their own aggression in toto; asserting that it is the Jews who are always the aggressors; that it is the Jews who are out to destroy them; and that they are the poor, helpless victims of the Jews. By distancing themselves from their own aggression and projecting it onto Israel and the Jews; they have retained their honor as the peace-loving people they claim to be.

It is essential to the success of the defense that they portray themselves as the victims and be seen as the victims in the eyes of the world. Even when their own behavior is responsible for the deaths of innocents, it is rationalized away and ultimately also blamed on the Jews.

Displacement, too, is also an effective method for psychologically avoiding reality. It is a step above projection and is considered simply neurotic. While projection can often appear to be completely uncoupled from reality, displacement has the advantage of allowing someone filled with unpleasant emotions to have an acceptable object onto which to express those emotions. Note that in projection, the individual completely denies that he or she even possesses or is capable of possessing those unacceptable emotions--it is the "other" who possesses them, and wants to inflict them on you.

Historically, the Jews have been the offical scapegoat (object of displacement) for many societies. If only the Jews were gone, then all would be well. The world would be perfect.

We see something similar in much of the rhetoric of the left. If only Bush were gone, everything would be perfect. None of these awful things--like 9/11 would have happened and the U.S. could go back to the idyllic days of the Clintonian utopia.

Likewise, if only the world put a halt once an for all to Israeli aggression, then the Middle East would be at peace.

This is as clear a case of "blaming the victim" as you will ever see on a grand scale. It is far too threatening to blame the real aggressor; and the real source of hatred and genocidal intent-- who are incapable of being rationally dealt with or deterred anyway. This real aggressor repeatedly states its intentions clearly and unambiguously. It even uses Western technology and icons to further its message of hate and death and extend it generationally.

Yet, for some curious reason, those in the West who are able to see it and hear it refuse to believe what they see and hear--particularly when the focus of the hate is directed toward themselves. The words are laughingly dismissed, and the actions that logically derive from the words are minimized or ignored--and the perpetrators get out of jail free because the psychological decision is made to opt out of reality.

If life was a board game, it would be a lot of fun to suispend objective reality for a time without having to suffer any serious consequences. But even in Monopoly, reality eventually triumphs and you land on someone else's Boardwalk and must pay the piper.

No rational person can deal with someone who glories in victimhood and destructivenss to a degree hardly paralleled in human history and who screams "god is great" even as he blows you and himself up in a nihilistic frenzy. To say the least, this is fairly frightening and inexplicable behavior for the modern man to psychologically metabolize. Thus, it must be defended against and prevented from being digested and analyzed.

The dynamic of displacement goes a long way to explain the remarkable and sometimes lunatic appeasement of Islamofascist aggression and violence by so many individuals and governments and around the world, even as they fearlessly trash the US (and particularly Bush) and Israel. Denial and displacement give you the illusion that you are in control of the situation and that the solution is simple.

The only problem is that reality doesn't go away simply because you have found a way to satisfactorily (and temporarily) deflect it; and have managed to hide the unpalatable truth from yourself.

In the real world, there is no "get out of jail free" card that can insulate a person or a group for very long from the consequences of their dysfunctional behavior. Eventually all the Paris Hiltons; all the Palestinians--indeed the entire world will have to face reality.
Posted by Dr. Sanity at 6:04 AM