A VISION OF THINGS TO COME, Part II

From Andy McCarthy at The Corner, who summarizes the situation nicely:

Iran Extends Its Proxy War Against the U.S. from Iraq to Afghanistan
While the State Department engages in direct negotiations and joins the EU in pleading with the mullahs to stop enriching uranium, all of which the chuckling Iranian regime takes as a sign of weakness because it is, of course, a sign of weakness, Iran not only indicts Americans for death penalty offenses but now arms the Taliban against NATO, just as it has been arming Iraqi terrorists against U.S. and coalition forces in Iraq (that is, when not engaging in direct strikes against U.S. forces) (see Bill Roggio, here).

Tiger Hawk has the run-down, here. As he says: "Make no mistake about it, Iran is waging war against the United States and its allies."

As I've mentioned before (see, e.g. here and here), throughout the 1990s, we pretended that we were not at war while a determined, implacable enemy was clearly at war with us. We saw the results. Iran was part of that enemy then, and it has never stopped. If killing Americans is not enough, just what exactly do they have to do before we do something meaningful in response? 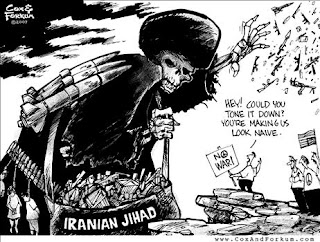