CONGRESS TO WITHDRAW FROM WASHINGTON. -- Will Redeploy Somewhere Safe

Its way too dangerous for our troops to be in Iraq (its a quagmire and the majority of Americans don't support it anyway) ; and even Afghanistan, home of the "real" war on terror, must be abandoned (despite the fact that even the enemy admits defeat...).

So, with Congressional approval at an historic low (gee, I wonder why?) the course of action suggested in this cartoon by Eric Allie should definitely be considered: 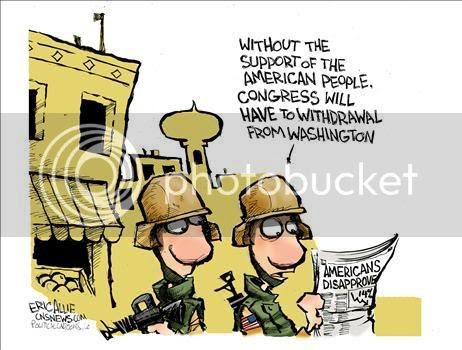 Perhaps, along the lines suggested by John Murtha a while back, Congress could redeploy to someplace where their approval rating is much higher...say, Tehran or Damascus? Just send in Nancy Pelosi to speak to the friendly guys in those places so she can lay the groundwork for peace in our time.
Posted by Dr. Sanity at 6:10 AM