Here is someone who thinks that Moqtada al Sadr is "An Enemy We Can Work With":

Mr. Sadr’s re-emergence — American officials say he had been hiding in Iran, while his followers say he was lying low around Najaf — in such a suggestive place was undoubtedly meant to be a reminder of the young cleric’s disruptive potential. But I think the real lesson about Mr. Sadr’s return is subtler, and far more positive.

It is no accident that he preaches from the Kufa mosque rather than the more prestigious one at Najaf. As the site of the tomb of Imam Ali, the great martyr of Shiism, Najaf is the center of the Shiite clerical hierarchy, a Vatican of sorts for the faith. It is a rich city.

But Moktada al-Sadr leads a movement of the poor, inherited from his father, who inherited it from an uncle. His singsong exhortation in Kufa last week was a direct reference to the most famous cry from his father’s epic, and ultimately suicidal, sermons under Saddam Hussein in the 1980s: “Yes, yes, to electricity. Yes, yes, to water.” Young Mr. Sadr speaks not for the elites but for the biggest and most deprived group of people in Iraq: the Shiite lower orders.

Let me tell you something, and I will say it only once: Moqtada al Sadr speaks for Moqtada al Sadr. He cares about "the biggest and most deprived group of people in Iraq" about as much as any predator cares about his prey--and with substantially the same level of concern.

The key thing to understand about Al-Sadr is that he considers himself the rightful ruler of Iraq for a variety of reasons. Sadr is one of four sons of the Grand Ayatollah, who was murdered in 1999, along with two of Sadr's brothers either by Saddam's agents or a rival Shiite family (it is still not known for sure who was behind the murders). But, the deaths resulted in Sadr inheriting a large network of schools and charities built by his father; and despite his youth and inexperience, many of his father's supporters transferred their allegience and devotion to him.

Sadr lacks the religious training necessary to be a powerful religious leader, but the devotion accorded to him is more based on his meticulously documented lineage, which apparently can be traced directly to the prophet Mohammed. The detail of this lineage is considered unprecedented even in the Islamic world where every leader claims to be related to Mohammed; but it accounts for the power wielded by this rather junior cleric, who otherwise would likely not have much authority at all. Sadr has recently claimed the title of hojatolislam, which is the first major rank for a cleric on the path to becoming an Ayatollah.

His greatest claim to fame is the creation of the Mahdi Army--named after the Mahdi that Ahmadinejad also awaits--and this army is supported by Iran in its insurgency operations.

Al-Sadr has been using both violence by his personally controlled insurgents as well as political maneuvering to try to consolidate his position in Iraq. His supporters make up a number of seats in the Parliament and controled 6 minister seats (including Health, Education and Transportation) until just recently when he pulled them out and announced his complete opposition to the current Iraqi government.

Until the recent pullout, Al-Sadr was trying to find a way to undermine the Maliki government while not getting on the bad side of the U.S. and the coalition. Since President Bush announced the surge in troop in Iraq designed to clean up insurgent operations--particularly of groups like the Mahdi Army--Al Sadr has been forced to declare his intentions and come down firmly in opposition to both the current Iraqi government and the U.S. -led coalition.

He made two bold moves from the relative safety of Iran where he has been for the past several months. First, he has pulled his ministers out of the Iraq government, hoping that such a move would destabilize it; though it is doubtful that it had any such effect (no matter what the press trumpeted). In fact, it is more likely that the government was set to get rid of the Sadr loyalists who were actively undermining their authority.

The second move was to call for demonstrations (presumably "peaceful") against the U.S. and the Iraqi government in order to distance himself from the direct violence, which he undoubtedly also supports, controls and manipulates throught the Mahdi militia members. Recently in Baghdad, there have appeared posters and banners with Sadr's image that read, "I'm Shiite, I'm not Sunni, but I am Iraqi." in an obvious attempt to reposition himself as a man for all seasons.

However, Sadr is a typical tyrant who regularly uses violence and threats of violence to consolidate his personal power. He has killed his religious rivals and has shown repeatedly his willingness to murder in order to optimally politically position himself. He also is very good at playing both sides for as long as it suits him. It does not appear that he is primarily motivated by religion, however much he justifies his activities as for the good of Islam. Al-Sadr is in it for himself and there seems to be very little difference between his techniques and those of Saddam's.

Iran is likely behind Al-Sadr's current activities financially and operationally; but Sadr is not in it for Iran either, and it is likely he sees himself as superior to even the Mullahs there because of the impeccable lineage he represents from the Prophet.

Sadr's recent activities and rhetoric suggest that he still thinks he might be able to consolidate his power in Iraq via political means and is eagerly awaiting the departure of U.S. troops to make this happen (and probably counting on the Democrats in Congress quicken the process). However, he is the sort of person who would rather see Iraq destroyed if he cannot be in control.

His personality structure is very similar to Hezbollah's Nasrallah and Hamas' Mashal--a structure that regularly appears in Islamic culture, which seems to cultivate and nurture a deadly sociopathic style that likes to hide beneath the skirts of religious piety. As The Belmont Club notes, Sadr, along with Nasrallah and Mashal are the three tentacles of Iran:

These are the three arms of Iran in the Middle East that have worked consistently to ruin every emerging democratic project. And these arms must be cut off sooner rather than later.

The NY Times piece linked above reminds me of the parable of the snake, which goes like this:
Once upon a time there was a serpent who was badly injured in a fight with another animal. It managed to slither away to safety but would have surely died if a benevolent man had not seen it suffering by the side of the road. The goodly man carefully wrapped the snake up and took it to his house, where he bestowed the kindest and gentlest care on the snake until it was healed and could return to the wild. Just as the man was releasing the serpent back into the grass, the ungrateful snake turned and bit him on the hand.

"What did you do that for?" cried the man, who knew that the bite of this particular snake was usually fatal. "I just saved your life and you repay me by attacking me with your lethal venom! How could you do that?"

The snake shrugged (some snakes can do that) and said, "I don't know why you are so surprised. You knew I was a snake when you picked me up."

Anyone who cozies up to Sadr or one of the other serpents molded by Iran, imagining that they can work in good faith with them, had better understand that the essential nature of these poisonous creatures is not going to magically change. 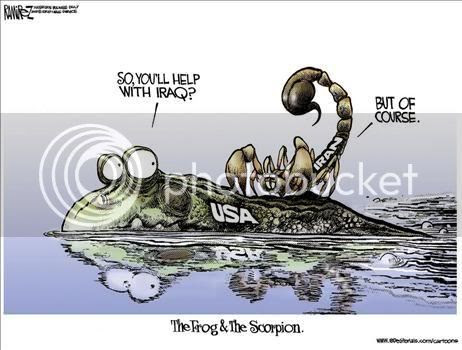