PROTESTING TOO LITTLE AND TOO MUCH

For Berger to risk jail and disgrace, to then give up the right to practice his profession merely in order to avoid having to answer questions, he must be hiding something important. And if it is that important to him, it is also important to us.

The most likely explanation is that the material Berger destroyed points to a terrible mistake by Berger himself, by President Clinton, or by both. In dealing with al-Qaeda, did they overlook a critical piece of information or miss a chance to stop 9/11? Did the Administration's failure to take a more aggressive posture encourage al-Qaeda's later attacks?

When Fox News' Chris Wallace raised the possibility that Clinton's Administration might have done something more to prevent 9/11, Bill Clinton went into an inexplicable rage on national television. Wallace touched a nerve. So did the DC Bar.

Knowing what information Berger destroyed also might alter views of the current Bush Administration. Was the early support from both Bill and Hillary Clinton for going to war against Saddam based on something we don't know yet that was available to insiders in the Clinton Administration? Was it something that could come back to haunt Hillary and ruin her chances of winning Bill's third term?

Whatever it was, it's likely that what Berger destroyed could have helped us understand what led to the most tragic terror attack in our nation's history and perhaps also help us decide what course - and what Chief Executive - will best to protect our future. The fact that Berger has been able to avoid revealing that information is a scandal of its own.

The only person who knows what information was lost is Sandy Berger. And he isn't talking.

*******
What is at stake is more than what we think and say about Sandy Berger. It is more than the legacy of Bill Clinton and of George W. Bush. It is more than the prospects for Hillary Clinton becoming the Democrats' presidential nominee and ultimately the President. All of these, of course, are wrapped up in this story.

Our security and vitality of the rule of law in America are at stake as well.

The two things I highlighted in that excerpt (and read the entire thing) are the instructive psychological responses made by the people most involved in this deception; and both responses are extremely suggestive that they are desperate to hide something terribly important and that they know and understand how important it is.

One is "protesting too little", i.e., willingly giving up his license to practice law without a fight in order to avoid answering any questions; and the other is "protesting too much" by flying into a rage at a reasonable question. Both are more interested in their own personal legacies than they are in their country's best interests; and their behavior demonstrates that narcissism very clearly.

"Public servants"? What a joke. This country is plagued by narcissists cut from the same cloth as the two discussed above--narcissists who regularly use their position of public trust for personal aggrandizement and the most base self-gratification. This is what our politics became in the age of Clinton and that will forever be his legacy, whether he likes it or not.

I would rather a thousand money-grubbing William Jefferson's who stupidly hide $90,000 in freezers and who unabashedly bribe their way to wealth, but who are just run-of-the-mill thieves and criminals; than any more William Jefferson Clinton's who, with the help of their trusty minions are ready, willing and able to sacrifice their own country on the altar of their super-sized egos.

The former behavior in any public servant is bad enough; but the country cannot survive an entire political party devoted to the proposition that feeling good about themselves is far more important than protecting this country from Islamofascist terrorism.

I just wonder how much of this denial and delusion the American public is willing to tolerate? How long can half the population of this country pretend that there is no real threat to our country and --if there is a threat, then it is because of Bush/Cheney and American imperialism or corporate greed--or both. How long will they willingly to let themselves be conned into accepting the safe and rather comforting belief (at least it is safe and comforting in comparison to the reality) that all the evil in the world is Bush/Cheney/America's fault?

I have more than a professional interest in the answer to those questions. 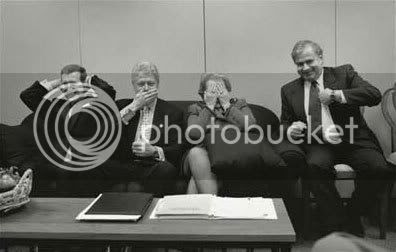