Consider this opinion by Michael Graham in Jewish World Review (and you ought to read the entire thing):

The Council on American-Islamic Relations is outraged that I would dare to connect the worldwide epidemic of terrorism with Islam. They put it down to bigotry, asserting that a lifetime of disinterest in Islam has suddenly become blind hatred. They couldn't be more wrong.

Not to be mean to the folks at CAIR, but I don't: Care, that is. I simply don't care about Islam, its theology, its history — I have no interest in it at all. All I care about is not getting blown to smithereens when I board a bus or ride a plane. I care about living in a world where terrorism and murder/suicide bombings are rejected by all.

And the reason Islam has itself become a terrorist organization is that it cannot address its own role in this violence. It cannot cast out the murderers from its members. I know it can't, because "moderate" Muslim imams keep telling me they can't. "We have no control over these radical young men," one London imam moaned to the local papers.

Can't kick 'em out of your faith? Can't excommunicate them? Apparently Islam does not allow it.

Islam cannot say that terrorism is forbidden to Muslims. I know this because when the world's Muslim nations gathered after 9/11 to state their position on terrorism, they couldn't even agree on what it was. How could they, when the world's largest terror sponsors at the time were Iran and Saudi Arabia — both governed by Islamic law.

I must agree with the author. I DON'T CARE ABOUT ISLAM except insofar that people of that faith want to destroy me, my family, my country and my way of life. For more than 50 years of my life, Islam and I got along famously. I completely ignored it; and praise be to Allah, it completely ignored me.

After September 11th, I no longer had that option.

This reminds me that there used to be cute little rabbits that gamboled and cavorted in my peaceful neighborhood. I was able to safely pay no attention to them--until they started to eat my garden. Then steps had to be taken. I found to my dismay that my neighbors also were victims of their interminable ravaging for food; so we combined forces and eventually got rid of the nuisance.

Poor rabbits. They have no free will and were doomed by their nature, so I feel sorry for the poor critters. I still feel they would be welcome in my neck of the woods, if they could refrain from getting into my garden and destroying it.

A friend just today sent me this article, which says in part that American Muslim scholars have issued a "fatwa" against terrorism. But, the article also says:

Many Muslim leaders overseas have issued similar condemnations in recent weeks, but some have left an opening for violence to be used. British Muslim leaders who denounced the July 7 attacks in London said suicide bombings could still be justified against an occupying power.

Sorry, but as long as there is an "opening" it won't be good enough. The rabbits used to sneak through, under or over whatever fencing I put up, too.

Islam has been welcome in my neighborhood, along with all other faiths and religions-- but not under these current conditions and not under Jihad. If they can't control what is being done in their name to all the gardens of the world, then I MUST pay attention. And it will not go well for them, I guarantee it. 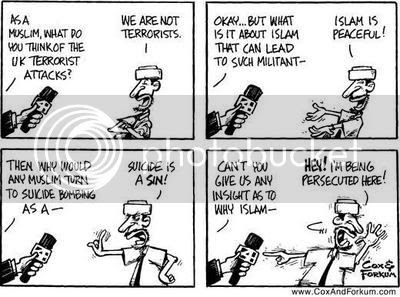 UPDATE: Then there's this, from the Internation Herald Tribune:

Most commentators argue that Islamic terrorism is a fanatical perversion of Islam which deviates from its true teachings. They call for a Western-style modernization of the Muslim world, hoping thereby that radical Islam will be tamed.

This analysis misses the point. The nature of the terrorist threat is unambiguously Islamic and is not so much a deviation from Muslim tradition as an appeal to it. Al Qaeda's ideology draws on two traditions to legitimize itself: one classical, the other modern.

UPDATE: Michael Graham has been suspended w/o pay for writing the column quoted above. Michelle Malkin has the details. Meanwhile, we will wait for civil libertarians like Michael Moore to protest this outrage. (7/29/05 2:00pm)

UPDATE II: A blogwave of support has started for Michael Graham and Free Speech. Check it out at the Strata-Sphere.
Posted by Dr. Sanity at 9:25 PM