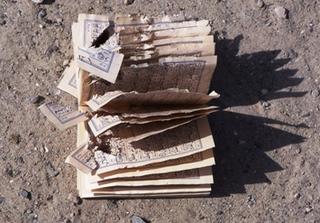 Noah Shachtman writes from Iraq about a truck bomb that went off, killing the driver and ripping the truck to pieces (go see the other pictures and read Shachtman's account of the incident and of the troop's feelings about the news coverage). It was likely a botched suicide bomb attack, since the truck did not make it into the base. Lying nearby was this Koran, shredded by the blast. (hat tip: J.O.)

Desecration? It's a good question. But what struck me in the account was the added worry and concern that our soldiers must deal with every day as they wonder what kind of news is being reported on the front pages of newspapers and in the ledes of CNN et al.

I could care less about a Koran ripped apart by a suicide blast. What worries me is the disrespect the media routinely demonstrates toward the soldiers on the frontlines of a war that threatens our very way of life. Here they are doing a difficult task and facing a cowardly enemy that only knows hate from their religion. What worries them the most is how the media is reporting their work, and how their loved ones must feel when they see the news that makes it seem like everything is falling apart all the time.

Like today in the NY Times. A story on the front page above the fold that starts out; "THEY JUST KEEP GETTING STRONGER" Isn't that marvelous? They are, of course, talking about the terrorists in Iraq and how resourceful and determined they are. Clearly they believe we should just give up and go home in the face of such resourcefulness, determination, and sassiness!

I should mention that none of the military sources I read believe that this is actually the true state of affairs; and that repeatedly it is emphasized that the US cannot be beaten militarily by the terrorists in Iraq. But, who cares! It sounds good to say it and it saps the will and determination of those at home. The MSM knows it can win this war; that it has the ultimate power, and that that power is psychological, not military. How strong they must feel to wield such power without any limits! Imagine in WWII after all the defeats inflicted on the US and its allies, the news reporting that the Japaness just "keep on getting stronger" and how hopeless the war was? Would the media have changed the course of history?

As LGF notes-- the media have become the enemy. They fight alongside the terrorists, cheering them on; egging them on. They care nothing for the Truth, since they define Truth as what they report and how they report it.

That is the real desecration.
Posted by Dr. Sanity at 12:30 PM