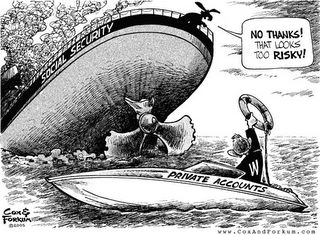 From Cox and Forkum.

According to the most recent FoxNews poll:

Overall, fully 79 percent of the public think people under age 55 should have the right to choose between keeping all of their Social Security contributions in the current system and investing a portion of their funds. That support goes up to 84 percent among respondents under age 55.

On the personal level, 53 percent say they want the choice to invest a portion of their contributions, up from 48 percent in early February — soon after President Bush spoke in his State of the Union address about offering investment accounts. Among those under age 55, almost two-thirds (64 percent) want the option to invest.

More generally, when Social Security is not mentioned, most Americans say they trust themselves (77 percent) over the government (15 percent) when it comes to making retirement investment decisions.

I recently requested and received a statement from Social Security (if you would like to do so, go here). I have worked all my life and since graduating from medical school have earned a very comfortable living, even when working part-time. I was mildly surprised --both positively and negatively--by my statement.

Positively because it was nice to see that all the money I have paid into this system I would get some of it back when I retire. Negatively because I am getting so little of it back despite the large amount I have contributed over the years (anywhere from 25%- 33% of my annual income each year).

I am certainly very relieved that I have had the opportunity to keep a separate private retirement account throughout my professional life. Let me be very upfront: I am absolutely lousy with money. Ask my husband. Ask anyone in my family.

I have done all the wrong things that investment people caution against. For example, I have at various times actually cashed out some of my retirement funds for various things (e.g., when my family moved to the much more expensive Ann Arbor area from Texas a few years ago). This is a BIG no-no according to financial experts, and it wasn't the first time I did it.

All in all, I would say that I could have at this point in my life almost double what I do have in a personal retirement account-- if I had not withdrawn it for non-retirement purposes. Also over the last 5 years I have noticed a significant decrease in the amount of return on my various mutual fund investments, but have been too lazy to do anything about it. In summary then, I represent the worse possible case of indifference, idiocy, and ignorance related to investing in the market.

And yet, the interest on the amount of money I have saved in that personal account will give me more than double what Social Security will every month.

Like most reasonable people, it is hard for me to see this as a bad thing.
Posted by Dr. Sanity at 5:04 PM