Apparently some people are extremely disappointed that the new Pope will be Catholic. Some are concerned because he is too old..

I'm waiting for the forthcoming comparisons with John Bolton and Tom DeLay. Especially since Pope Benedict XVI is pretty direct about what he believes 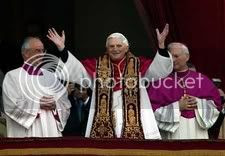 (and is referred to as the "hammer" just like DeLay!); and in questioning the moral relativism of the world. He even sort of looks like Bolton, but without the mustache. So we're likely to hear some unkind remarks about his appearance anyday now from the gurus of the fashion elite. And even more about how blunt, hardline, and uncompromising he is. Some are even saying that he will alienate people from the Church, but I don't see it. What is more likely to alienate is giving into the attraction of the "popular" and embracing indiscriminantly what is modern, simply because it is modern. I don't think he will do that. He is the leader of the Catholic Church, after all. Not some political party trying to get elected.