Adrift and Losing It 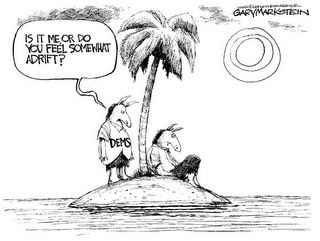 Since taking over as chairman of the Democratic National Committee earlier this year, the former presidential candidate has been quoted in newspapers making unusually caustic remarks about Republicans.

Dean has suggested that they are "evil." That they are "corrupt." He called them "brain-dead" during a stop in Toronto -- and while the Terri Schiavo case was still in the news. He has tagged Sen. Rick Santorum (R-Pa.) as a "liar." Last week, the Minneapolis Star Tribune reported that he mimicked a "drug-snorting Rush Limbaugh" at an event there....

"It's odd that Howard Dean says he wants to earn the respect of those who live in the red states, but chooses to not only attack their views but attack them personally," RNC spokeswoman Tracey Schmitt said. "Americans want to hear an agenda, rather than name calling."

How sad it is that the Democrats seem capable only of calling their opponents names(since the Bolton hearings, you can add "mean" to Dean's list of descriptive terms).

Of course, by Democrat standards, calling Republican's "evil", "corrupt", "brain-dead", "liars" and "mean" does not qualify as being mean in and of itself, which would clearly disqualify Dr. Dean from any national position--but, ONLY IF HE WERE A REPUBLICAN!

Can you possibly imagine the hysteria of the national press if, say Karl Rove or the RNC Chair were to label the poor Democrats in such terms? Why, they would have to be heavily sedated.

But then what do you expect from a political party that is completely adrift, with no ideas that aren't 50+ years old? Like castaways on a desert island, delerious and starving for some--any!--intellectual sustenance, they are completly losing it.
Posted by Dr. Sanity at 2:06 PM