More Than Real Evidence Ever Could.... 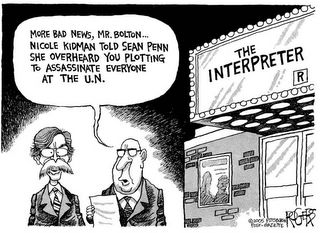 The next allegation against Bolton? I wouldn't be at all surprised.

Meanwhile, LGF has some interesting information on one of the accusers and some of the other absurd claims.

This whole Bolton brouhaha reminds me of an episode of the Simpsons ," Bad Man", where Homer is accused of sexual harassment and suffers a trial by media as everyone seems jump on the bandwagon of saying what a bad man he is. A media circus then ensues with coverage of Homer's depravity on every channel. In particular, there is a daytime-television talk show, with the theme "mothers and runaway daughters reunited by their hatred of Homer Simpson."

One woman is sobbing and says, "I don't know Homer Simpson, I -- I never met Homer Simpson or had any contact with him, but -- [cries uncontrollably] -- I'm sorry, I can't go on." The interviewer responds, " That's OK: your tears say more than real evidence ever could."