Is There Evidence of Life at NASA?

Sure, by all means; of course. Let's put an end to one of the most successful and innovative exploration programs ever conceived by NASA. It is an old and presumably useless program--even though it has given us our first up-close look at many planets in our solar system. Like the energizer bunny of space, Voyager keeps on going and producing not only real scientific data, but also gorgeous and inspiring pictures of our universe. But NASA needs to set up the hundreds of committees and levels of bureaucracy necessary for a new space initiative, so that they can thoroughly screw up future space endeavors like they have the Shuttle Program. So, Voyager must be axed now--even before the spacecraft leaves the solar system! Hey! It has only taken 28 years to get as far from Earth as it is now--no big deal. We can do it again later!

Sometimes I wonder if there is any evidence of life at NASA--or if the people running the place are in a persistent vegetative state?

In a cost-cutting move prompted by President Bush's moon-Mars initiative, NASA could summarily put an end to Voyager, the legendary 28-year mission that has sent a spacecraft farther from Earth than any object ever made by humans.

The probable October shutdown of a program that currently costs $4.2 million a year has caused consternation among scientists who have shepherded the twin Voyager probes on flybys of four planets and an epic journey to the frontier of interstellar space.

"There are no other plans to reach the edge of the solar system," said Stamatios Krimigis, a lead investigator for the project since before its launch in 1977. "Now we're getting all this new information, and here comes NASA saying, 'We want to pull the plug.' " 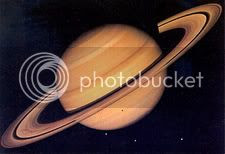 Of course, NASA is blaming the fact that their budget is going to be cut in 2006, but with a cost of $4.2 Million it seems like an incredibly stupid thing to cut one of the most successful programs and ...do what? Waste more money sending a bunch of people up in low-earth orbit with nothing to do?

This is the sort of thing that used to drive me crazy about NASA when I worked there. They are so insulated from the real world that they haven't a clue about what ordinary people respond to. They are desperate for public attention, but most of the time are so mind-numbingly boring and uncreative in their press releases and general public relations that they could discover the ruins of an ancient civiliztion on the Moon and describe it as "Golly gee whiz, isn't that something over there in that crater?"

I don't mean to be cruel, but why in heaven's name don't they ever get someone intelligent and exciting running that organization? Someone who can communicate the incredible wonders that are out there waiting to be explored; the incomparable and elegant beauty of space? Why can't they find someone who is just a teensy bit interested in "going where noone has gone before" instead of trying to go "faster, cheaper, better" and ending up going nowhere?

The US Space Program is dying of terminal boredom and lack of vision. Cancelling Voyager is just another symptom of that agonizingly slow and painful death.
Posted by Dr. Sanity at 10:49 PM