SHAME, HONOR, AND THE CONSEQUENCES OF THE BAKER-HAMILTON REPORT

It doesn't take a psychiatrist to figure out why Iran is ecstatic about the ISG Report recommendation that they be included in discussions about Iraq.

The Captain wonders how many more victories we want to hand the mullahs; and it is essential that we understand the fundamental psychology at play, otherwise we will continue to do exactly that. We are talking about a shame culture here, and Baker-Hamilton have just elevated the international status of the barbaric, totalitarian thugs who run Iran and their psychotic president by acknowledging that they are our "equal"--even suggesting that they are superior in that they can assist us out of a difficult situation.

And, of course, the Democrats, the left, and media all joyfully rush in to reinforce that perception. These segments of American society operate in the manner of a shame culture themselves--whatever humilitates and shames America brings their ideology and its adherents great honor and even joy.

So, is it surprising that in the mullahs eyes, America's tacit surrender in Iraq is a source of honor and status? And with more honor in that culture, comes more arrogance, more swaggering rhetoric and veiled threats; more taunting of the Jews, Israel, and the West; more oppression of its own people, and more flaunting of its nuclear ambitions.

This is exactly the same dynamic going on with North Korea, by the way. And, even there, there are forces of appeasement, surrender, and complete moral idiocy working hard to bring honor to Kim Jung Il and shame to America.

What motivates regimes like Iran and North Korea is the avoidance of shame, and maximization of honor. For them it is is simple elementary psychological math. In such cultures maximizing their honor involves shaming you--or, in the case of the ISG, allowing you to shame yourself publicly and thoroughly. A public display of gratuitous self-flagellation and mea culpas by the U.S. is music to their thuggish soul. They can now offically consider you as weak and inferior. It is only a matter of time until they then proceed toward your complete subjugation. Only by your total humiliation and defeat can their own honor continue to be maximized. Just ask the women in their culture (the ones that are not brainwashed by this cultural dynamic anyway).

By allowing these sick regimes to preen and flout their sense of superiority at the expense of the U.S., the Baker-Hamilton Report has quite possibly proved to the mullahs that there is no one strong enough to stop them now from obtaining (or using) nuclear weapons. It has also further enabled and encouraged them to believe that they can easily wipe us off the map (just as Kruschev wanted to "bury" us) or force us to submit to their religion.

You may be asking yourself, what in God's name (or Allah's perhaps) were Baker- Hamilton and that useless committee thinking?

That is easy to answer also. Like many people in this country at the present time, they were not, in fact, thinking at all. In point of fact, their conscious cognitive processes were outsourced to their unconscious feelings and fears, as they closed their eyes to an unpleasant reality (and I am not talking about Iraq, as unpleasant as the facts on the ground are right now) and retreated mentally from dealing with a post 9/11 world.

In such a state, while in the grip of this profound and near-suicidal psychological denial and projection, they can even pronounce their actions "realism". 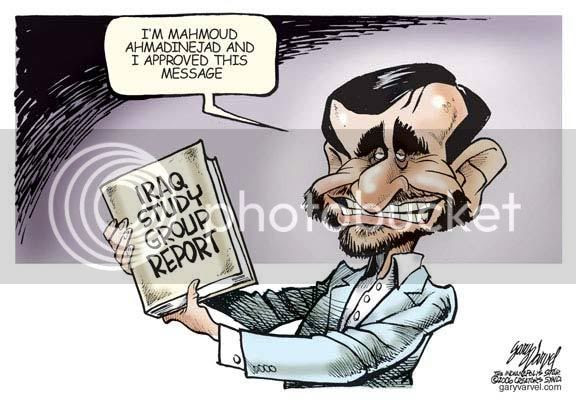