Reasonable people have many reasons to be vconcerned about the idea of Iran obtaining nuclear weapons. I have written about some of those reasons here, here, here, and here for example.

But then, the political left and its ridiculous minions are far from reasonable, and are only capable of making hysterically absurd statements like this:

But with the fate of our Iraq occupation sealed through the end of the Bush presidency, the most pressing question is whether the Leader will use the last two years of his presidency to provoke some sort of military confrontation with Iran, and people like Herman are not standing on boxes in Times Square where they belong, but instead are writing in Commentary, which continues to exert real influence among the radicals who have driven our country into the state it is currently in (as but one example, Mark Halperin favorite Hugh Hewitt commended Herman's war plan as a "must-read").

When attempting to understand what has happened to the United States over the last six years, the fact that moronic commentary like Herman's was (and largely continues to be) treated as "serious" and "responsible" foreign policy wisdom, while those opposing the commencement of offensive wars were demonized as frivolous radicals, is the necessary starting point. For the same reason, excising people like Herman and his allies from our political dialogue is the highest priority in beginning to repair the destruction they have spawned.(emphasis mine)

Of course, the author of this overblown, and, if I may steal his own word, frivolous nonsense, is writing a book! So this sort of mindless, knee-jerk and vacuuous commentary (which members of the left always--always--claim is in touch with 'reality' (but only if one lives in some parallel universe existing in the bubble that is their brain) seems reasonable to them. Amazingly in their deluded minds, it is the United States that is provoking a confrontation with Iran!

The fatuous commentary by Greenwald, who "feels absurd even dignifying Herman's "analysis" with a substantive response", goes on and on and on and predictably doesn't bother with substantive responses at all. Just dismay, incredulity, and the usual hysteria of a mind twisted by leftist twaddle and isolated in the left's echo chamber. Nowhere does he even bother to address the real issue at stake here: the consequences to the US and its allies (particularly Israel) that would ensue if a nuclear Iran were loose in the real world. That Iran would use such weapons for blackmail and genocide is of less concern to him than that the evil U.S. --under the thrall of the desperate neocons--should dare to proactively respond to such a threat. He seems more concerned with drastic, albeit vague, consequences of provoking the poor oppressed Iranian regime who it seems to him could "worsen" our "horrendous" strategic position "immeasurably."
That we could "worsen" theirs is not an option that he thinks we should be open to.

Like a desperate and terrified child peeing in his pants when threatened by a great big, bad bully, Greenwald would run away and go crying to his mother (presumably the terribly effective and empathic UN who has been so successful at managing the Iranian regime over the last decade or more).

I would suggest that if you want to see how an adult might manage a bully threatening to use nuclear weapons to "wipe Israel off the map", you go read the article in Commentary by Arthur Herman that initiated Greenwald's frightened bout of babbling bullsh**t.

But only if you want to be reasonable. 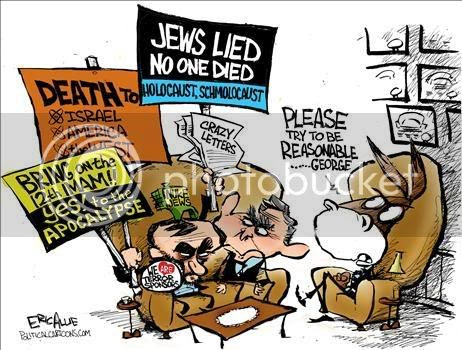